Don't Bet Against Tito. Ever. 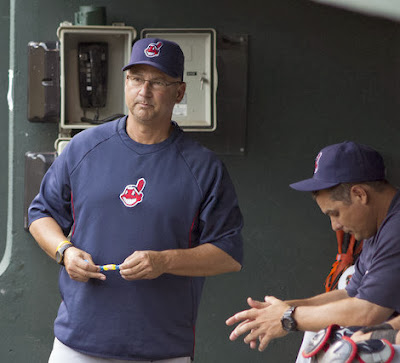 Managers make a difference in baseball because as a player you either believe in them or you don't. When Grady Little tells Pedro Martinez he's his best option in Game 7 of the 2003 AL Championship Series, Aaron Bleeping Boone happens. When Joe Maddon tells David Price he's his best option in the Monday Night One Game Playoff Game, “that's what I'm talking about” happens. The difference is the manager. You sell it or you don't. Maddon sold it, Little didn't. Their pitchers responded accordingly. (please note that Grady Little, according to his Wiki page, is now head coach of a high school in North Carolina.)


This is why I wouldn't bet against any team Terry Francona manages in the postseason. Especially the Cleveland Indians. Consider that Francona's first year managing the Boston Red Sox worked out pretty well. So I wouldn't go against them tonight against Tampa, and while the division series against those Red Sox will be difficult, I think the Indians have a pretty good chance. Let's be honest, did you think the Red Sox were the best team in the AL this year? I thought they looked pretty damned lousy at times. Of course, baseball is a sport where failure is the norm. if you fail 7 out of 10 times at the plate, you're a pretty good hitter because you're batting 300. if your team fails to win 40% of the time, you win 97 games. The difference between a 90 game loser and a 90 game winner is a 20 game swing. In a six month season, that's two fluke wins or two fluke losses a month.


Because the Red Sox won two World Series with Francona at the helm, the Indians players take Francona's direction and beliefs seriously. You can argue that Theo Epstein put the Boston teams together and Terry just got lucky, but how's that Chicago Cubs experiment working out? Eppy may have been the one to bring David Ortiz and Curt Schilling to the Red Sox that helped win the World Series, but did it really take a genius to get a top-notch big-game pitcher? Ortiz is a more of a find, but Minnesota actually released him after 2002, when he was 26. Or, two years before any athlete really comes into their own. When Babe Ruth was 28, the Yankees won their first World Series. When David Ortiz was 28, it was 2004. You know how that ended.


Anytime you can win two World Series with a team that seemed like it had a curse on everyone who crossed its path, everything you did before looks like brilliance waiting for an opportunity to flourish. Francona was Michael Jordan’s manager in the minors, the year MJ played for Birmingham. His first year as a major league manager, in Philly, they had the best second half record of any team in the majors. Of course, in the first half they made the 1962 Mets look brilliant, so maybe that's not a good example.


Nevertheless, Tito (which is actually his father's name) is seen as a major league managing genius. Because of that, and the likely ego that goes with it I figured he and Epstein would reunite in Chicago and try to do for the Cubs what they did for the Red Sox. Clearly, Eppy took that challenge, while Tito wasn't exactly enamored of the idea. This immediately told me that Francona has not let the successful seasons in Boston go to his head. As for Eppy.... well, he's in one in Chicago.


I figure a major league team can win 62 games pretty much automatically. (please note: the Houston Astros are not a major league team by any perspective.) The way a team goes from 100 game loser to .500 (a 19-game difference, from 62 wins to 81) is by having the average expected production out of everybody on the team. A team that goes from .500 to 90 wins leaves the ballpark victoriously a mere nine extra times. That's about one win every five or six weeks. And that's the difference between the Kansas City Royals and the Cleveland Indians this year. The Royals were “good,” the Indians are a playoff team. (And in KC, they're doing backflips because they're considered “good.” Such is life for a baseball fan in Kansas City.)


That's what Tito brings to the table. It's the thing that doesn’t show up in the stat sheet: the belief in the players to get the job done, and that will make the players push just a little harder. The Indians were 10-2 in extra inning games this year, and the first two wins in their current ten-game winning streak were in extra innings. The Pythagorean winning percentage for the Indians this year was 90-72. If they do that, they miss the playoffs by a game. Instead, they went 92-70 and made the playoffs by a game. For that two-game difference, you need look no further than those two extra inning wins that started the streak.


Now, the statheads will tell you they got “a little bit lucky” to win those two extra games, but my favorite quote about that subject is: “luck is what happens when preparation meets opportunity.” That's Terry Francona's success as a manager in a nutshell. He sells his players on success, and they buy it. They won two extra games so they can play at least one more. And if the Francona streak continues, they'll play a lot more. You thought the Red Sox winning the World Series was weird. How weird would it be if the Sox's World Series drought and the Tribe's drought were snapped by the same manager? Somewhere in North Carolina, Grady Little will be pissed.