A lot has happened in Oregon football this week, and there hasn't even been a game yet.


I suppose the whole Colt Lyerla thing needs to be addressed, so I’ll get that overwith first. For his whole career as a Duck-which is only two years, by the by- there have been rumors that Colt liked the nose candy plenty. And like with most people, we who heard this hoped that he would, well, stop that. But we've all seen it happen too often; a player thinks he's invincible because of success on the field and there's no way it can be taken away, no matter what they do. It doesn’t matter whether it's illegal substances or driving too fast or even not eating right, it will catch up with them. It did with Colt. Let's hope he gets the help he needs and gets a chance in the league, he'd be a great help to any team with his skills- on the field. If not, there's always the AFL team in Portland with Darron Thomas.


Last week I didn't write a preview column because, well, it was Washington State. I didn't write a preview column for Colorado either and in both cases it was because I thought the matchups were too stupid to write about. (That, or I was busy elsewhere.) Admittedly, that's not the best reasoning, but come on, Wazzu had no chance and everybody knew it. Well, I was at that game, where Cougs quarterback Connor Halliday set an NCAA record by making 89 pass attempts. As a friend of mine pointed out, plenty of MLB starting pitchers don't throw 89 pitches in one of their starts. So that's a lot. The Cougs ran for two yards- the whole game- and kept throwing late in the fourth quarter, when traditionally you run the ball and keep the clock moving when the game is out of reach like that.


So afterward, Oregon defensive coordinator Nick Aliotti (who is the best soundbite evah) said it was “bullshit” that they kept throwing, and that it was “low class” to do that. I thought he had a point. Hand the ball off. Finish the game and get the hell out of there. I have another friend who argues that what Oregon does to speed up the game is not traditional, and for them to call somebody else out for not doing something traditional is low class on the Ducks part. Of course, the guy who said this is an Oregon State alum.


And this should be a full column by itself someday: if you do something nontraditional in the game of football, at what point is it “low class” and at what point is it “innovation”? Is trying to run a play every 12 seconds to keep the defense off-balance innovation because you're trying to give yourself a competitive advantage? Or is it low class because you're not playing fair with the defense? Is trying to jump the kneel-down at the end of the game when you're on defense and down by a touchdown low class because they're not trying to run it up on you? Or is it innovation because what if it works and you get the ball and score the touchdown and win the game as a result of it? I suppose it depends which side you're sitting on. Rock and roll was innovative because it combined at least three musical genres and made electric guitar the go-to instrument (before then, it was hardly featured anywhere except the blues)... but for the majority of the country in the 50's, it was low-class and the devil's music.  (Here's an excuse to show Jerry Lee Lewis going a little goofy.)


Anyway, Aliotti got fined five grand and reprimanded for saying what he said, which is bullshit. He disagreed with an opponent's strategy and said so. How is that a fine-able offense? 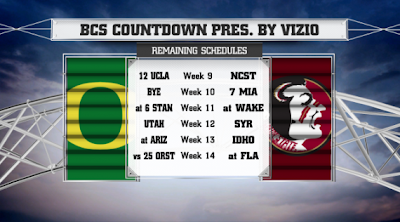 Finally (before we actually get to this week's game), the first BCS polls of the season, which have Alabama 1st, Florida State 2nd, and Oregon 3rd. A huge hue and cry in Duck country, although I did point out on twitter that:


No BCS title game matchups were ever decided in mid October. #breathe

The truth is that FSU has played the better schedule- for now. The combined record of the Seminoles opponents is 27-13, with six of those losses coming to FSU, so they're really 27-7. Oregon's opponents combined record, meanwhile, is 22-27 (my goodness, Cal sucks), or, taking away the losses to the Ducks, 22-20.


Now, if you look at who they will play (including Saturday), Oregon's opponents are 25-8 (with three ranked teams-UCLA, Stanford, and the Beavs), while FSU's are 21-19 with one ranked team left (also-currently undefeated and #7 Miami), so it certainly appears that Oregon will jump the 'Noles should both win out.


For curiosities sake, I checked Alabama's record in this same fashion. They are currently 22-28, or 22-21 taking away the losses to the Crimson Tide (whooo, that 0-7 Georgia State and 1-6 Kentucky really bring down the average) while their future opponents are 21-8 and two of them are ranked (#13 LSU and #11 Auburn, both teams that Duck fans are familiar with), so it appears that Alabama will only strengthen their case as well if they win out.


As for the teams right behind the Ducks in this, Ohio State and Missouri.... we'll worry about them later if we have to.


Anyway, onto this week, where the #3 Ducks host #12 UCLA in Oregon's biggest game to date. The Bruins looked bad against Stanford last week (who didn't look so hot themselves). The Bruins are clearly much improved in their second year under Jim Mora- and let's not forget that UCLA is the only team to have won the Pac-12 South every year it's existed. Which is only two years, sure, and the first year they only won it because USC was on probation, and, uh, let's just move on.


UCLA looks better. But remember, Washington is also looking pretty good, and Oregon put them away in the third quarter, and that was in Seattle, and this one's in Autzen. UCLA is tied for 50th in the country in rushing defense, opponents averaging about 150 yards per contest, and Oregon is still second in the country in rushing offense, at 332 per game (Army, who never throws the ball, is first with 340 yards per game. They're dead last in passing with 68 yards per. Oregon is 19th there at 310 per).


I say Oregon doesn't allow more than 30 points and puts up at least 50. For those who think UCLA has a chance? In the words of Nick Aliotti, bullshit.