It's not for the national championship or Rose Bowl, but neither is it for the only win of the season. For most of the Civil Wars, it feels like one or the other has been at stake. Mostly option B. The Civil War 30 years ago is the prime example of option B. We'll get to that soon enough.

But because the game has been for Big Stakes for five consecutive years starting in 2008, (when the Beavs would have gone to the Rose Bowl with a victory) this Friday's game (4pm PT, on Fox Sports One) is a definite comedown, there's no question there. It does feel a bit like new territory for the Civil War, but it really isn't. It feels to me like a return to the games of a decade ago, right after both teams made the Fiesta Bowl in consecutive years. Those Civil Wars were good, competitive games, and they were for improved Bowl position, just not Big Bowl position. That was when the home team won for ten straight years.

Except it isn't a return to those days. This is a contest between two teams that have taken drastically different approaches to how you put together a football team. When it works, it works pretty well. And when it only mostly works, you can get taken down by teams who exploit your weaknesses. Last week, we saw that these teams have it mostly put together. Oregon has chosen the “Blur,” Oregon State has chosen the pro-set. Both teams have been more successful for the previous ten years than they have for any other decade in their college football lives. But both approaches have fatal flaws. It just happens that Oregon has fewer fatal flaws in their flue.

Oregon gets beat by teams who have a strong offensive line and a strong running game. Considering that Oregon State's Sean Mannion has already thrown for 4089 yards, third most in a season in Pac-whatever conference history, that's not likely to happen this week.

Oregon State gets beat by teams that can run the hell out of the ball. (See: Washington last week ran for 530 yards.) Oregon is still third in the country in rushing, at 315.2 yards a game.

So all those Beaver fans who were cackling right after Oregon's Disaster in the Desert last week, (and I did say that Oregon could lose to a team they shouldn't, I just said it for the Utah game and not Arizona) and predicting Civil War upset got a lot quieter after the first quarter against the Huskies, when they were down 17-0. After the third quarter, they trailed 48-0, and Beaver believers weren't believing in anything. This doesn't, on the surface, look like Oregon State's year.

The Beavs haven't beaten Oregon since 2007, when they won 38-31 at Autzen to snap that “home team wins 10 years in a row” streak. But 2007 was also the last time Oregon lost at Arizona, when they were national championship contenders, but their QB got hurt and they flamed out in Tucson. Does that sound familiar to you?

Yes, the Beavs have a chance. Yes, Sean Mannion could throw for 500 yards, giving him the conference record for passing yards in a season. He might anyway, regardless of the finish. The Duck DB's can be beaten. They give up yards. You know that, I know that, they know that, kids in Australia know that.

But the Beavs can't run the ball and they can't stop the run. Remember when the Ducks played Washington State? Connor Halliday set an NCAA record with 89 passing attempts, because the Cougs don't even bother running the ball.

I'll bet that OSU comes out heavy on the run because Oregon has proved they can be beaten by the run. But here's the thing- if OSU couldn't run against Washington, who gave up 106 yards on the ground to the Beavs and 265 to Oregon, why would they think they can run against Oregon? The Ducks gave up 194 yards rushing to that same Huskies offense that ran for 530 against the Beavs. Clearly, there's an actual hole to be exploited there. Oregon's Byron Marshall needs five yards to become the 20th Duck to rush for a thousand yards in a season. He might get that on the opening play of the game.

Oregon State started 6-1 and they could finish 6-6. Oregon started 8-0 and has since gone 1-2. Based on recent history, that's not so good for either team. But this is the 30th anniversary of the Toilet Bowl, when the Civil War ended in a 0-0 tie, the last scoreless tie in college football history. Tell me who'd rather have those days back.

I'm rather interested in the crowd at Autzen Stadium. There's a very good chance that this could be the game that ends Oregon's “sellout” streak (that's in quotes because I've been to games that had plenty of fans dressed as empty seats) because Oregon students didn't bother picking up their tickets. For the Civil War! That used to be the only game that meant anything! In ten years these current Duck students will kick themselves for not going to The Civil War.

I tweeted this after the Arizona loss:

You don't know how good you had it, Oregon fans. Well, now you do. Good luck at a half-empty Autzen for the Civil War. Another ten win season and a top-ten ranking going into Bowl Season? I can see you yawning from here. I wonder what you'd do if the Beavs pull the upset. Maybe we'll find out. 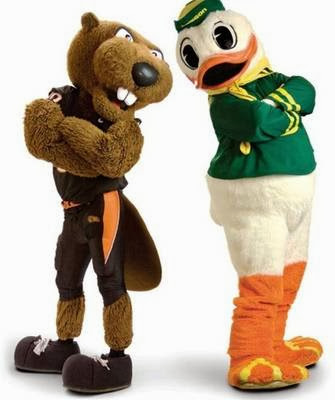