The Curious Case of the Legend of Marcus Mariota

The perception in Oregon is that when Marcus Mariota goes back to the islands, he's treated like Elvis when he shows up in the beginning of “Aloha From Hawaii.” Big deal, can't get a moment's peace, forced to ride around in limousines the whole time he's there, etc and so on. And when people from Hawaii who are in Oregon walk around in Mariota bootleg t-shirts and say, “That's my boy!” the legend grows, because that’s just how it works. I was at the Wild Duck in Eugene not long ago and the entire staff was wearing those Mariota t-shirts and saying the only place you could get them was Hawaii and that they pretty much hand them out to Oregonians like leis at the airport and that everybody out there can't get enough of Super Mariota.

With this perception firmly in mind, my aunt and uncle were headed to the islands the week of the Stanford game. Now, they are not huge football fans, but when you live in any college town for 40 years the university assumes a certain standing in your life. So they were excited to go see what it was like watching a Duck game in Hawaii. And not just any Duck game, the biggest game of the year- a primetime Thursday night matchup. So they ask me, the sports guy (who, by the way, has not been to Hawaii in almost 20 years) where a good place to go watch the Duck game. I had no idea, obviously, but based on this perception that we've been hearing about the legend of Marcus on the islands, I said “You could just go up to any house and knock on the door, I'm sure everyone will be watching that game.”

So when they left for their relaxing two week vacation, I requested one of those shirts that you can only get on the islands. It's that normal human thing, you want what's not available to you. Hell, that's the plot of Smokey and the Bandit. The fact that people wanted Coors because they couldn't get it in Georgia- and when people talk about the implausibility of Smokey and the Bandit, that doesn't even get mentioned- is an amazing plot. As a matter of fact, that selfsame uncle who went to Hawaii always requested us to bring Coors to Oregon when I was a kid because you couldn't get it in Oregon in 1979. Because at the time Coors had a long-standing rule that you could only sell Coors in areas it could be trucked within a certain amount of time, to keep it fresh. I'm not even kidding here. Getting Coors in the 1970's was the equivalent of trying to get Pliny the Elder anywhere but Sonoma County today.

So the aunt and uncle finally got to Hawaii- their original flight got cancelled and ended up getting in to Honolulu some 10 hours later than they had planned- and I'm not going to say the name of the airline that totally hosed them, just that I have never had any major problems with said airline and it's name rhymes with “Ohmyted.” And one of their goals on holiday, aside from sitting at the beach for hours, was to get some of those authentic Hawaiian Mariota shirts. Not just for me, but for themselves. You know, that human thing of wanting what others can't get.


When they finally returned, 16 hours later than expected- Ohmyted couldn't land at the Eugene airport because of fog and went all the way back to SF and then claimed it wasn't their fault that they couldn't land, even though it was their fault that the plane was a half hour late leaving in the first place and if they'd gotten to Eugene on time then there would have been no problems- one of the first things they told me was about their Super Mariota t-shirt experience.


One, they couldn't find any.


Two, nobody on Oahu that they talked to had ever heard of Marcus Mariota.


Three, there was no mention of Mariota in any newspaper report they read. No preview of the Stanford game, no follow up- no nothing.


The newspaper thing was surprising but not astonishingly so. What with newspapers all but shutting down at 8pm no matter where they are, to have little coverage for a night game (even if it did start at 4pm Hawaii time) is not out of the ordinary. But a top team with a top QB from the islands might garner a little coverage. Or not.

That they couldn't find a t-shirt or anybody who had ever heard of Marcus... well, that's more than a little odd. They say they were directed, finally, to a store that sold sports stuff- and that guy only had a couple of University of Hawaii things and nothing Oregon related and had, again, never heard of Marcus.

As for watching the game itself, I think the result of that search should be obvious by now. They came upon no major watch parties- in fact, they had a hard time finding anybody showing the game.

It should be noted that my aunt and uncle are not “sports bar” people. In fact, if they find that a place is a sports bar, they're more likely to not go to there. They prefer restaurants without teevees. In addition, they did not go to Hawaii to watch the news. So they didn't watch a Hawaiian newscast, much less a sports segment to see if the sports guy mentioned Marcus. I would, but then again, I’m a news junkie.

That's not the point now. The point is that they couldn't find anything or anybody who knew who Marcus Mariota was. And that is really, really odd. I remember during Mariota's first season, one of the Hawaii media outlets sent a guy over to Oregon to cover Marcus’s transition to big time college football. If I recall correctly, he was in Oregon the week of the Stanford game- the other game Marcus has lost in his college career. There may have been somebody at the Fiesta Bowl, but there were a lot of people at the Fiesta Bowl that I didn't recognize or hear ask a question.

So we are back to the perception, that Marcus Mariota is bigger than life on the islands. That his stature in Oregon as “the man” is magnified a billion times at home. But it seems that this is not the case. Yes, this is only from what two people saw on vacation. But they were there, and we were not. 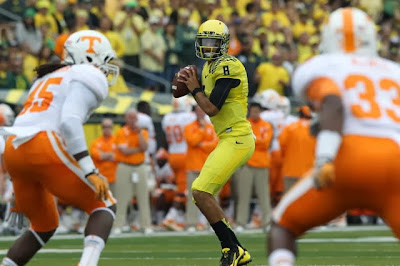