Two Point Conversions: Why Doesn't Anybody Follow the Rule?

When the NFL finally approved the use of the two point conversion in the early 90's, I remember two things. One, then-Tampa Bay coach Sam Wyche, who was asked how many times he'd try it in the preseason: “We're going to do it every time until we figure out when it works and when it doesn't.” (In the two years Wyche coached Tampa with the two-point rule, they made exactly three conversions during the regular season. The first season.)

Coach Wyche notwithstanding, pundits agreed on one concrete thing about the new option: Don't go for two until you absolutely, positively, without a doubt have to. Exhaust all possibilities in a conventional format before you start trying for the deuce. (Unless you're trying to mess with people's heads early in the game, aka the Chip Kelly provision- but even the Ducks generally only go for it on their first score of the game, unless the other team is just waayyyy out of position.) There was also a corollary to that one and only rule, which was that once a team started going for two point conversions, they couldn't stop. When you commit, you commit. Doesn't seem that hard. Recently, I've seen two teams ignore rule 1A and 1B, and it cost them the game.

I was reminded of this Saturday night, in the late game between UCLA and Arizona. With just under 13 minutes to go in the fourth, Arizona scored a touchdown to bring the score to UCLA 24, Wildcats 19. Arizona head coach Rich Rodriguez made the call to go for two, and the announcers did not question this at all. I shouldn’t be surprised all that surprised at this, since the play by play guy was Joe Tessitore, who one game insisted for six hours that the Oregon quarterback's last name is pronounced “Mar-i-oh-TAHHHHHHHHHH.” That made him lose all credibility as far as I am concerned. And the other guy was Matt Millen, and if you take anything he says seriously you are either a Raiders fan from way back or a very gullible Detroit Lions fan. (Do I really need to use the word “gullible” in front of the phrase “Detroit Lions fan”?) 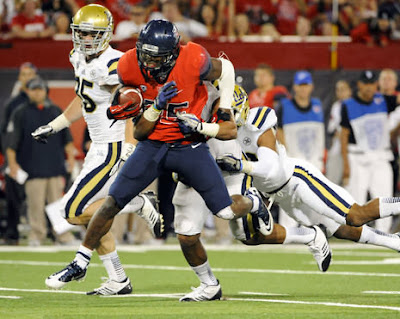 Here's why I decided Arizona should not go for two: it's 24-19 and you're trailing by five. The plus of making the two is that you're down by a field goal. But that's the only positive thing about it. It's like what some coaches say about passing the ball: “Three things could happen and two of them are bad.” Well, going for two with 13 minutes to play is like that: if you make it, you're in great shape; but if not, you are pretty much hosed no matter what happens. Failure on a deuce try when you're down by five means that a field goal by the other guys puts you down by eight, and a touchdown and an extra point means you're down by 12- a three possession game. Yet what happens if you kick the extra point and are down 24-20? Then, that made field goal by the other team means you're down by seven- extremely do-able- and a touchdown and an extra point means you're down by 11- a touchdown, a made two pointer and a field goal. And there's still 13 minutes to play. You have to assume you're going to get the ball back at least once more, probably twice, and three times if you get an onside kick late.


But RichRod didn't do that, and the worst possible scenario then ensued: Arizona went for two and failed, so they're down by five. UCLA gets the ball, and one minute later, two-way player Myles Jack breaks out for a 66 yard TD run. So the Bruins kick the extra point, and that means that the Wildcats are now down by 12- a three possession game. The Wildcats then go down the field in three and a half minutes and score a touchdown.


Now, where are we in the two point possession rules? Well, RichRod already ignored rule 1A, (not going for it until you absolutely, positively without a doubt have to), so why would he follow 1B? So he kicked the extra point, and Arizona is down by five, and nobody scored the rest of the game, and the Wildcats lose, 31-26.


But what happens if the only thing that changes between those two touchdowns is that RichRod kicks the extra point after the first one? Then the 'cats are down 31-26 before the second extra point or two point conversion try. And that's when you can think about going for two- but even then there's no guarantee. Consider. You've just scored two touchdowns in five minutes. If you kick the extra point to make it 31-27 then yes, you are still a touchdown away from taking the lead, but the momentum is clearly in your favor. A UCLA field goal means you are down 34-27, a touchdown and an extra point away from tying it up. A UCLA touchdown means it's 38-27, and you're right back where you were. And if you go for two and make it? It's 31-28. You're a field goal away from a tie.

But that only happens if you don't go for two before you absolutely, positively without a doubt have to RichRod not only ignored rule 1A, he clearly ignored rule 1B, and Arizona lost by five. But RichRod's not the only coach to fail at such strategic decisions. And let us not forget, football is a game that is based entirely on strategic decisions. This next failure happened in the pros, and it caused the Super-Bowl front runner to lose their only game of the season so far.

I'm talking of course about the Denver Broncos (anyone who thinks the Chiefs are anything but Super Bowl pretenders must be a Matt Millen fan. Somehow). It happened in the Sunday Night game against the Indianapolis Colts. To recap, the Colts were ahead by 19 points, 36-14, just under 13 minutes to go. Peyton Manning does what he does and Denver has a 59-second drive, so with just over 12 minutes to play, it's now 36-23 pending the conversion.

You're Broncos head coach John Fox (best wishes for a speedy recovery), so what do you do? Since you know what this column is about, you know what happened: Denver goes for two and fails, keeping it 36-23. Again, it's the “three things can happen and two of them are bad” analogy given to the two-point conversion. Denver ends up losing by six, 39-33.

But let's pretend, because we can, that Denver doesn't go for two and instead kicks the extra point. Then it's 36-24, a 12-point game. Three and a half minutes later, at the 8:11 mark, Denver gets into the end zone again. If they had kicked the extra point the first time, it would now be 36-30 pending the conversion. You have Peyton Manning, your defense is picking up, and you're down six points. Yet at this point it's still not I-have-to-go-for-two time. I kick the extra point to make it 36-31, a five point game.

Three and a half minutes later, Adam Vinatieri kicks a field goal for the Colts to give them 39 points. If everything else had stayed the same but Denver had just kicked the extra points, as suggested here, it is then 39-31 with 5:57 to play. Do you think Peyton Manning has a touchdown and a two-point conversion in him to complete the comeback and tie it at 39? At this point I wouldn't bet against it. Instead, because the Broncos went for two before they should have and it didn't work, and they didn't continue to go for it, they instead were down nine points, and it would have taken an absolute miracle- which they didn't have in them. John Fox failed to follow the first two rules of the two point conversion handbook. And there really are only two rules in the two point conversion handbook. And there really aren't two rules; there's a corollary to rule one.

It seems rather apparent that Rich Rodriguez and John Fox both ignored the forest for the trees. They saw that going for a two point conversion and getting it right at that moment would put more pressure on the other team, which is correct. What they didn’t consider enough was the effect failing at the try would have on their chances as the game progressed. For both teams, they had more than 12 minutes to play. RichRod is running a spread offense at Arizona. John Fox has Peyton Manning in Denver. Both those truths mean that both teams have the potential to score very, very quickly. As I explained n both scenarios, kicking the extra point the first time around would have ultimately put both their teams in better position to complete the comeback. But that failing on the two point try with much of the fourth quarter to play would effectively seal their fates. Both teams failed on the two pointer, and both teams lost.

And by only going for two once, these coaches failed to follow rule 1B, of continuously going for two after that. If you believe you are in a big enough hole to go for two the first time, what has changed the next time you score a touchdown? The simple answer is, absolutely nothing. If you go for two the second time and make it, then you've made up for the fact that you were too stupid to just kick the extra point earlier. And if you fail the second time, then screw it, you might as well onside kick and throw all caution to the wind, because why blow your chances when you can torpedo them and dynamite them at the same time?

The one possible counter-argument to this is that there is a chart, and that is says go for two when you're down five (RichRod) and go for two when you're down 19 (Fox). What it doesn't say is when to start using the chart. From the scenarios I have shared, I think it's safe to say that chart needs to be updated. Considering that Dick Vermeil created it when he was Tommy Prothro's offensive coordinator at UCLA. In the early 1970's.


But at least RichRod and John Fox can quote Sam Wyche when they're done with 2013: “I wish we'd won one or two more ballgames, especially in the last year.” And they'll instantly know of at least one, when they absolutely, positively, without a doubt shouldn't have gone for two.