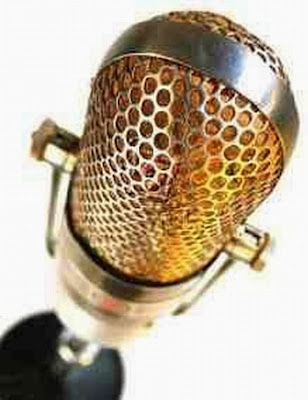 Four or five years ago I was talking with some friends of mine who are also very knowledgeable about sports and one of them said, “Man, we should have a sports talk radio how,” because they felt like they could host a show and be good at it- and they would be. But I was not interested.

“Forget that,” I said. “You've got great opinions, but sports talk radio is caller driven. Why do you want to spend three hours talking to people who know less about what's going on than you do? Plus, if you're calling sports talk radio you're either really fired up and angry and wanting to vent... or you're drunk. Who wants to deal with that?”

I know this because I've called sports talk radio before. I've been one of those two guys. I also know that's what sports talk radio has been for the past 30 years or so, since it began (and here's a great article on the history of the first sports talk radio station, WFAN in New York). And I never wanted to host a show where that was the point. I want to hear the guys who know more than I do talking about sports that I like to watch/pay attention to. Not irrational drunk guys.

After explaining this to my friends, we actually came up with a pretty good concept for a sports talk radio show, which would be at the first sign of a caller being irrational or drunk, we would hang up on them. Back when I was calling sports talk radio it seemed like they had a pretty good screening system, but at the same time if you're on hold for half an hour or more (which regularly happens), you're liable to get angrier and angrier and/or more liable to finish the beverage you happen to be holding in your hand and get another.

Listening to national sports talk radio dependent on irrational drunk guys is the worst. I don't care about your team as much as you do. And I certainly don't want to hear about it for 20 minutes at a stretch. So you might be able to figure out that sports talk radio never did anything for me.

But sports talk radio has changed radically in the past few years, and for the better. Twitter has changed everything, and that's the second time I've praised twitter, and the first time it's been written down somewhere. (The first time was the second day I had it, when it became breaking news central and I was amazed.) With twitter, you can interact with lots of people quickly and succinctly and stay on point. Which makes it ideal for sports talk radio. If you have something to say, you can say it without waiting for 40 minutes. And if you're wasted, this is one of the few times it doesn't matter as long as you can stay on point. 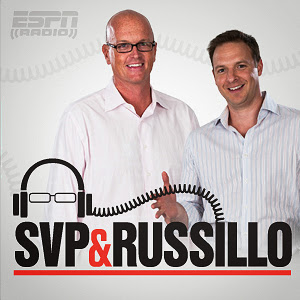 The best example of this by far is the SVP and Russillo show on ESPN radio, which on Wednesday was named the best sports talk radio show of the year by Sports Illustrated. (The future of SI is a weird thing, by the way. A magazine with pictures is not a selling point anymore when you can watch NFL games on your phone. That's worth another column.) Scott Van Pelt has always been one of my favorite guys on ESPN. He's always seemed like a Kenny Mayne who can sustain things for longer than an hour, and Kenny Mayne is also one of my ESPN favorites, or at least he still would be if I could ever figure out what he's doing nowadays.

Van Pelt's forte is golf (I always forget he spent four years at Golf Channel before joining the Worldwide Leader), and his on-scene hosting from the majors with Andy North is some of the best, most informative, least over-ESPN-ized television out there. And not to get too over-analytical here, but I think that the golf background helps keep the radio show on a more even keel that it would be if he came from somewhere else. More importantly, I think it gives him the freedom to shut up for a little bit. Radio is a funny thing- and I know this from hosting, not just the occasional call-ins- when you're on it, you feel like you need to keep talking because silence = dead air, and dead air = no show. But because radio is sound, sound, sound, and we're inundated with sound all the time, intentional radio silence is actually very, very powerful. And when SVP gets quiet, it means a) he's taking what the other person said serious enough that he's gathering his thoughts, and relatedly, b) what he says isn't going to be a knee-jerk reaction, which is what sports talk radio was in the days of caller-driven radio.

A moment here on SVP's co-host, Ryen Russillo. I have no idea who Ryen Russillo is except that he's SVP's co-host. He clearly has some credentials, but I have no idea what they are. He seems, at first listen, to be the “regular guy” to SVP's “insider,” but that's not true because he clearly has inside connections to the NBA, so maybe he was a beat writer or something. Anyway, he does not feel like a second banana, which is usually the downfall to sports talk radio co-hosts. Usually there's a clear main guy and a second guy. And what makes or breaks a show, in my opinion, is not the main guy- because they're the reason you tuned in in the first place- but the second guy. A real measuring stick of whether a sports talk radio show is any good is what is the show like when the main guy isn't there? I have some other sports talk radio shows that I check out nowadays, and when the main guy isn't there I immediately check out. So that means the main guy is the engine and the co-hosts are along for the ride. Not to say I don't like said co-hosts, but I wouldn't listen to them five days a week. Would I listen to Ryen Russillo five days a week if SVP wasn't in the chair next to him? I don't know.

The last time I changed my mind on a second banana, to drift away here, was when David Letterman had his major heart surgery, and after a few guest hosts, they let world's most dangerous bandleader Paul Shaffer host for a week or two. And Paul got a lot of kudos for having really smooth shows, not only from me and people I know who watch Letterman, but the critics too. Before then, it felt like to me that Paul was there to tell some bad jokes and wear flashy outfits and behave like this odd combination of Ed McMahon and Doc Severinsen. If anybody on the internet remembers those two. But Paul showed in those weeks that he could
handle being the Top Man on the show if Dave was gone. 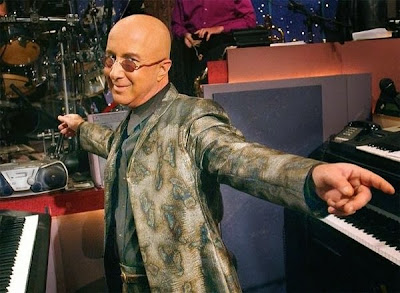 When Dave did finally return, he relied on Paul to help him get back into the rhythm of the show, and since then the dynamic between Dave and Paul has felt different. No doubt Paul gained plenty of confidence for himself in being able to do it- and respect for what Dave has done for 30+ years. But what it really meant, at least for me, is that if I turn on Letterman and he's out sick and Paul's there, I won't change the channel. That's a top co-host. If they can turn into the main guy and back into the co-host without missing a beat, they've succeeded beyond anybody's expectations.

Beyond twitter and a good host dynamic, SVP and Russillo also succeed because they don't spend 20 minutes on a topic. Again, in the bad old days of sports talk radio, shows would spend an inordinate amount of time talking about things that I simply do not care about. As a result, I'd flip the station. It's hard to convince a guy on the west coast that the Cowboys and Knicks are worth 20 minutes each on every national show. I understand there are lots of people in New York and Dallas. There are also lots of people in San Francisco and Seattle, and quite often it seemed like the hosts were making a big deal about what was happening in New York and Dallas because they happened to be located in the Big Apple or Big D, and if the same thing had been happening in SF or Seattle they would ignore it. I suppose that's natural, what's happening in your town is a bigger deal than what's happening in another town. SVP splits things up into seven or eight minute segments and it seems like they actually try to make salient points, not just that Coach X needs to be fired or Player Z can't come through in big games. They are also not afraid to wander off script and end up talking about something completely different than the topic they started out on.

You say this is logical stuff, that SVP and Russillo are merely doing what every sports talk radio show does nowadays. They are not. I listened to a non-national show from an area I am very familiar with recently, and the following things happened.

a) Caller-driven radio. With plenty of irrational drunk callers at 11 in the morning.

d) very little influence from listeners other than the callers- twitter was not utilized properly.

e) I flipped over to SVP and Russillo and haven't gone back since.

So yeah, today I'd deal with being a sports talk radio host. But SVP and Russillo are the gold standard, and hopefully they're going to be a force for improving sports talk for a long time to come. At least they're making me listen to the radio again.