BCS Title Game Wrapup. We Got Shanghaied, And It Was Good.

So guest predictor Bob of Arabia (aka, BOA) and the special guest predictor who didn't make any predictions and I decided that we should go watch the final BCS title game somewhere. Being near San Francisco, it was decided to meet there. So after that, we had to decide on a place, and we thought we found a good one. Then BOA discovered it didn't serve food, so that was out. So we got recommendations for a place that has been around at least 50 years. That BOA and the other guy looked up on Yelp only to find the kind of reviews you'd expect for a Burger King in India. (reminder: cows are sacred there.) So that was out. So then BOA found another place that sounded good. So the other guy and I wandered over to that place, only to find that nobody was there and it only had two teevees in the whole place, one of which appeared to be of the tube variety made in approximately 1985. So while I looked to see how close we were to the place of the stellar reviews, the other guy Google searched for Florida State and Auburn bars... only to find a Florida State bar three blocks away. So we went to check that place out.

We got there about a half an hour before kickoff, to find that several FSU fans had already taken seats about three feet away from the giant teevee in the main room. So that was good enough for us. And good thing we got there when we did, it filled up pretty good by kickoff. Now, you may recall that both BOA and I picked Auburn to win said contest, so being in an FSU bar was perhaps not the super wisest choice we could have made, but it's not like we were wearing Red Sox gear in the Bronx. We were neutral observers who had selected the other guys to win. You know, like Swiss Bankers who invested in Deutschmarks in 1938. It seemed like a good idea at the time. Kind of like coming up with that analogy.

As neutral observers, we got to watch the ebb and flow of FSU fans. Cheering when Bobby Bowden was introduced and booing Bo Jackson (the first time I've ever heard anyone boo Bo Jackson. I bet they would change their mind in a hurry if he was in the same room as they were). As Auburn built their 21-3 lead the room got progressively quieter and quieter, and we wondered when someone would buy shots for the whole bar to drown their sorrows in. And even though we were technically neutral observers, I bet even Swiss Bankers accept goldschlager without resistance when it's put in front of them.

I love to watch games with people that are heavily invested in the outcome while I could really give less than a damn what happens. When a touchdown or turnover happened I swiveled on my chair to watch the reaction. I heard people yelling at the refs for calls/no calls while I said to myself “yeah, that's not/that is a flag.” It's amazing how unbiased the refs seem when you're not convinced they're against you. I always end up thinking, wow, why are these people going so crazy? It's only a game. Then I remember that I probably look like that watching KU basketball games in March, so I try not to pass too much judgement. That said, it's always fun to watch people not care what anybody else thinks, especially if the people going nuts are stone-cold sober.

The counter to enjoying situations like this is the part where the entire crowd is chanting things that I've never heard in your life. And it's clearly things that they have tried to learn and spent years chanting, and I have no idea these chants even exist. It makes me feel like I'm in an different country and I don't know the customs. “Does this mean something? Why is this happening? Should I be worried here?” Then the FSU fans did the Tomahawk Chop and I thought, “Oh yeah, they're the team that does that,” even though it made me think of the Atlanta Braves, Ted Turner and Jane Fonda doing that during the early '90's Braves playoff games.

(Side note: are you aware that there are people who really hate Jane Fonda? She went to North Vietnam during the '60's and got nicknamed “Hanoi Jane.” Whenever she comes up certain of my parents friends do everything but spit on the ground and curse her name. If you actually look at what she did, then you have to admit they have a point.)

If you're confused why “Sydney Town” is the name of a bar in Ess Eff, well, these people clearly know their Bay Area history. “Sydney Town” was the original name of San Francisco's famed Barbary Coast district. You see, in the beginning it was originally inhabited by Australian immigrants who to the upstanding American immigrants who stole the Mexicans/Indians land for San Francisco and the Gold Rush, were the bad guys. And it's true that the Aussies did account for most of the crimes in early 1850's SF.... or at least most of the arrests. So the name “Sydney Town” is a throwback to those days. In addition, the Barbary Coast/Sydney Town was where plenty of people got shanghaied. Captains needed crews for their ships to the Far East, so patrons of Barbary Coast/Sydney Town establishments were occasionally drugged, which would cause them to pass out. Then they would be dropped through trapdoors to tenders underneath the saloons (since the saloons were conveniently built on piers over the Bay) and rowed out to the ships... and when they woke up the next day, they were out on the open sea, on the way to the Far East, quite often Shanghai. Thus the phrase, “shanghaied.” When I mentioned that the original name of the Barbary Coast was Sydney Town to Bob of Arabia he said, “We should watch for trapdoors in the place.”

Well, we found no trapdoors, and I had a swell time in Sydney Town. Finding a place that's partial to the outcome always makes the game more entertaining. The best experience I had watching a soccer game was the 2008 UEFA Cup Finalbetween Man U and Chelsea... at another bar in San Francisco, also with BOA and the guy who never made any predictions. But that's another story. The moral of this story is when you don't care who wins, really take some time to go watch the game with people who do. You'll be glad you did. Watching that comeback with a lot of people who wanted the comeback to happen made that game a lot more memorable than had we just watched it in a living room, or worse yet, a bar where nobody really cared. We got shanghaied by a Florida State bar, and it worked out just fine.

F-L-O-R-I-D-A, S-T-A-T-E, Floridastate-Floridastate-Floridastate, WHOOO!!!  And with that cheer, which was repeated like a needle stuck on a scratched record at the bar where me, The Sports Dude, and the elusive third member of the defunct sports monkeys watched the BCS Championship game, my final tally for this bowl season fell to 20-15.  My initial thought was to recap by revisiting each pick to see what I did wrong / right.  But then I realized those picks were made over a 5 week period, and I am up against Sports Dude deadline here, so bullocks to that idea. (Also, BOA, nobody cares but you. Sorry.)  Instead, let's talk about Monday night. 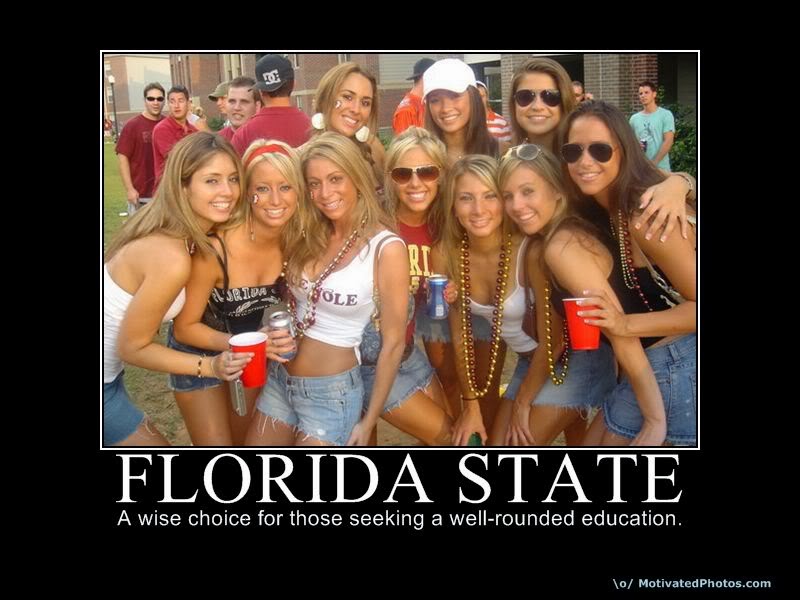 F-L-O-R-I-D-A, S-T-A-T-E, Floridastate-Floridastate-Floridastate, WHOOO!!!  Even though that is one of the worst cheers I've ever heard, every red blooded 20-something should have Florida State on the short list of potential colleges to attend.  It's no secret that Florida has an abundance of sun drenched beauty.  If colleges were a mirror, the Sun State would check its hair in the reflection that is Florida State University.  Any guy who is honest enough to admit it will own up to losing hours of class time to, um, distractions.  If the Sydney Town Tavern (an unapologetic "Florida State bar" in the middle of San Francisco's Financial District) is any indication, I now understand why FSU doesn't exactly have a stellar academic reputation.  Distractions.  Lots and lots of distractions.  With ever-so-slight Southern drawls.  Distractions that are so distracting they have an actual representative (Google registered trademark "the florida state girl" for reference)  And, we get free shoes too?  Sign me up!!

F-L-O-R-I-D-A, S-T-A-T-E, Floridastate-Floridastate-Floridastate, WHOOO!!!  When the bar blared the Florida State Fight Song over the P.A. system at halftime, that made sense to me.  When the entire population at the bar chimed in with the aforementioned cheer during said fight song, that made sense to me.  Then, right after Auburn had regained the lead in the 4th quarter, some new age 'Last of the Mohicans' crystal shop ambient music started coming through the P.A. system.  That made no sense to me.  I turned to my partners in crime and bluntly asked "WTF is this, some sort of Daniel Day Lewis (crap)?".  I can only guess it was some sort of FSU insider rain dance thing because immediately afterwards, dude ran that kickoff back.  So, distractions, free shoes, AND musical magic spells?  Sign me up!!

F-L-O-R-I-D-A, S-T-A-T-E, Floridastate-Floridastate-Floridastate, WHOOO!!!  Something jumped out to a couple of us during the game.  Jameis Winston, for all of his incredible athletic attributes, is slow.  Really slow.  Bengie Molina slow.  And, aside from that last game winning drive (which, by the way, what the hell was that Auburn?), Winston struggled.  Then, something else jumped out at us.....is Winston going to be yet another in a long line of tremendous Seminole quarterbacks incapable of making a difference on Sundays?  Dude is only a freshman, so I'll slow that roll....for now.  However, Charlie Ward, Chris Weinke, Chris Rix, Danny Kanell anyone?  Wait, Lee Corso played quarterback for the Seminoles.  Sweet.  So, distractions, free shoes, musical magic spells AND head gear predictions.  Sign me up!!! 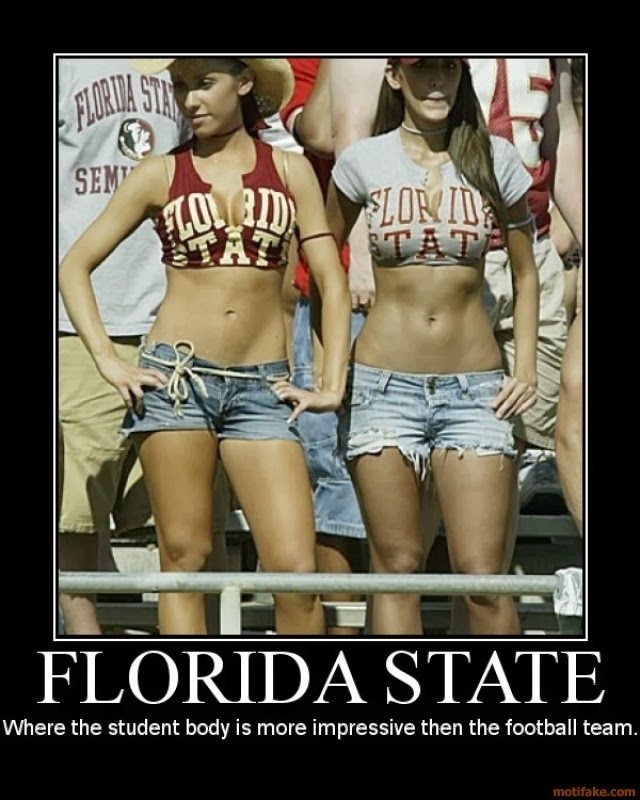