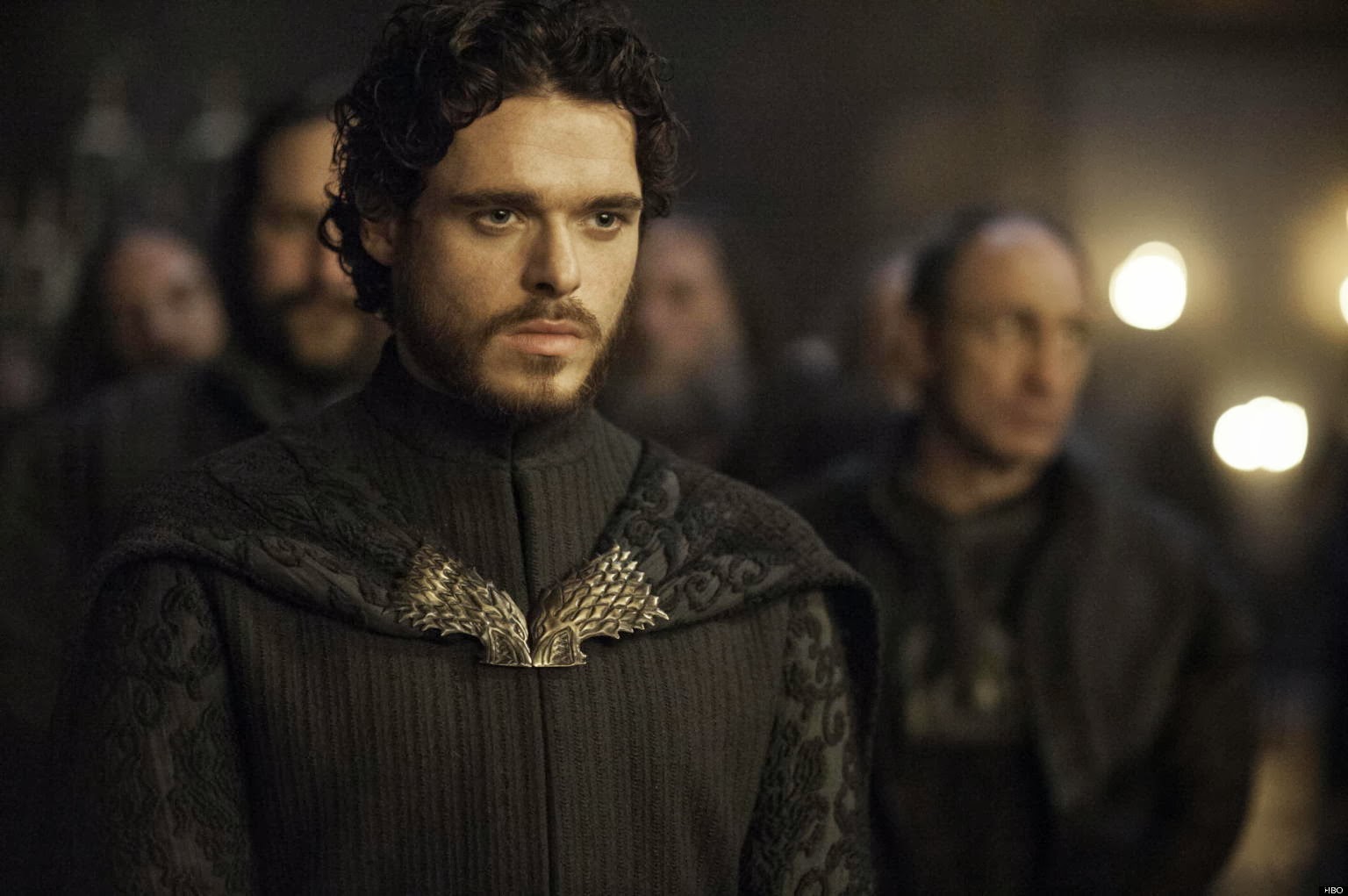 Having recently gotten caught up on Game of Thrones, (Helloooooo, Emilia Clarke! Jared Leto knows what I'm talking about.) I saw some previews for “Klondike” and immediately noticed it was the next adventure for Robb Stark (aka Richard Madden, if you want to be annoying and refer to him by his real name), seeing as his time on Game of Thrones had ended rather violently and without warning.

In the many previews for Klondike (airing this week on Discovery Channel), it seemed like it had several good actor-types (Tim Roth and Sam Shepard among them), plus Robb Stark seemed to do well in cold climates in Game of Thrones. Then there's the part where I've been to Alaska and Skagway (we went partially because I was interested in the Alaskan Gold Rush) and I am a history kind of guy, so I gave it a whirl when the miniseries started on Monday night.

I got concerned when the opening shot of the whole thing was an out-and-out lift of Charlie Chaplin's opening shot from “The Gold Rush,” probably his best film ever (and one of the reasons I got interested in the Alaskan Gold Rush in the first place, because I saw it for the first time when I was about ten years old).

I am always concerned when movies repeat shots from other movies and it's not done for laughs, but to give the current movie seem more innovative than it really is. Brian de Palma is the master of stealing things in this manner. His entire career is built around the fact that he rips off Alfred Hitchcock shots, not to mention themes. Although not from a Hitchcock film, the baby-carriage-rolling-down-the-steps shot from “The Untouchables” is his most blatant example, because anybody who's ever taken a film class has seen the original version of that, in Sergei Eisenstein's “Battleship Potemkin.” If you're going to borrow a classic shot, do something different with it to make it your own or a homage, not a super-blatant rip-off? It's why the shot-for-shot “Psycho” remake is now universally seen for what it should have been seen at the time, a terrible idea. I'm more than a bit surprised that de Palma wasn't involved in that remake at all. Maybe even he realized it was too much.

In another de Palma movie, “Snake Eyes” with Nicolas Cage, there's a marvellous shot where it's like the ceiling doesn't exist over multiple hotel rooms, and the camera tracks over all these rooms where all these little stories are going on, and you don't get know about any of them because you're going to the hotel room at the end of the hall, where the tracking shot ends. I remember being told that somebody else did that shot and de Palma just stole it, but even Google can't tell me from whom. De Palma's only redeeming quality as far as I'm concerned is that he was a major influence on Quentin Tarantino, who is nothing but original. So there's that.

Anyway, the opening shot of “The Gold Rush” is hundreds of potential miners going up a snow-covered mountain. And since Chaplin based his opening shot on an actual photograph, it makes sense that “Klondike” would start with miners going up a mountain. But you can do that epic shot later in the sequence, not to start things off. I'd rather go with a close shot of faces, or worn boots, or sleds on the snow, or miners collapsing. Anything but a de Palma-esque shot. I was questioning my decision to watch this thing from the first five seconds.

(Side, side note that may or may not be even close to relevant: The opening shot of “Klondike” is a Charlie Chaplin rip-off, and Chaplin's granddaughter, Oona Chaplin, played Robb Stark's wife in Game of Thrones. It seems to be a theme in Robb Stark's recent career. Now, if in his next movie he does a scene dancing with dinner rolls... well, all bets are off.)

And when I was done watching the first episode... well, Robb Stark should have stayed dead. The thing is plotted worse than an Elvis movie. If you're not familiar with Elvis movies, there are about ten of them where Elvis is playing an upstanding young citizen of America, trying to make it on his own... and his best friend is a degenerate gambler with a drinking problem who loses their money and gets them into trouble, which then causes Elvis to try and right the wrongs. “It Happened at the World's Fair” is the best example, because not only is Kurt Russell in it as a ten year old, but so is Yvonne Craig (who went on to be “Batgirl”).

(Another side, side note: Elvis was 27 when he made "It Happened at the World's Fair." And Kurt Russell played Elvis... when he was 27. Kurt feels a big kinship with Elvis, and does a damned good impression of him, too.)

In all of the Elvis movies, you wonder why on earth Elvis' character would even be friends with these degenerates. It's clearly not the first time Elvis has gotten into trouble, or threatened, or lost a bankroll while hanging out with this guy. Robb Stark is in the same fix in Klondike. Not only that, but there's no reason to have any sort of sympathy with Robb Stark here. At least in the Elvis movies something happens in the first five minutes to let you sympathize with the guy. Usually it's him singing the theme song announcing that he's making it on his own or something. In Klondike, Robb Stark is graduating from college in the first five minutes. I did that. You probably did that. How is Robb Stark any different?

In any series, you have to care about the main characters and want them to succeed. Klondike doesn't do a damn thing to make me care about Robb Stark in the first five minutes, and it starts with him nearly being covered by an avalanche. I don't care whether Robb Stark strikes gold or freezes to death in 40-below temperatures. His best friend was a tacky, overused plot point to get him here- anytime you're stealing plot points from “It Happened at the World's Fair,” you have made a major storytelling error- and so when his best friend is killed, I don't care if he finds out who did it or not. “The Maltese Falcon” is a vastly superior movie about a guy in a similar situation- except the guy who's trying to solve the murder is having an affair with the murdered guy's wife, and doesn't like the murdered man anyway. But like Humphrey Bogart says as Sam Spade, “When a man's partner is killed, he's supposed to do something about it.” It doesn't say anything about us giving a damn if we don't like the guy trying to solve the murder.

The other huge problem I have with this show is the dialogue. In Game of Thrones, even though it's a mythical world, the characters still talk like you expect 14th century noblemen to talk. In Mad Men, the thoughts and idioms are clear 1960's America. In Klondike, everybody talks like it's 2014. It's not supposed to be 2014, it's supposed to be 1897. I'm fairly certain the phrase “lame-ass” did not exist in the Yukon Territory in 1897. Hell, I would wager it's not used that much today in the Yukon Territory.

Finally, Jack London magically appears and becomes Robb Stark's friend. You may recall that Jack London got his fame and fortune by writing stories about the Alaskan Gold Rush back in the day. I'm just tired of the main characters of historical fiction of any sort running into famous people and becoming their friends. There were thousands of gold prospectors up there in 1897, and you run into Jack London on the first day? And then he follows Robb Stark around, presumably getting ideas for “White Fang” and “To Build A Fire,” and other London classics? Come on. The best historical fiction movie I've seen where a guy runs into a famous guy is Ernest Hemingway in Woody Allen's “Midnight in Paris.” Hemingway's there, he has some impact on the story.... but he and Owen Wilson don't become best buddies. Actually, “Midnight in Paris” is the best movie I've seen that's introduced famous people into the plot and made it seem natural.

Klondike is based on a book. I hope whoever sold the rights is satisfied with the check they got, because I will never read the book thanks to this disaster of a miniseries.

You want a story of the Klondike? Go read anything Jack London wrote. While you're at it, feast your eyes upon “The Gold Rush,” “It Happened at the World's Fair,” “The Maltese Falcon,” and “Midnight in Paris.” And may Robb Stark rest in peace.