How To Not Be A Basketball School


When I was an actual paid reporter and got to go to Oregon Duck basketball games on when a regular basis, it bothered me. I'm a Kansas graduate and I know what a real basketball crowd is supposed to be like on a regular basis. Every game at Allen Fieldhouse, no matter if it's a November first exhibition game against the Southeastern Northern Western State Mildcats or for the conference title on the first weekend of March, is sold out. Some games are more sold out than others. Officially, the biggest crowd in Allen Fieldhouse history is still the first game they ever played in it, in March of 1955. But I'll tell you, there are some crowds of 16,400 that are bigger than others.

While covering the Ducks on a regular basis, one of the other reporters I worked with went to Syracuse. He knows what a real basketball crowd is supposed to be like as well. And for all the hype about Matt Knight Arena when it first opened up in January 2011, it has rarely been an intimidating place to play.

And yet the Ducks have won at least 20 games every year Dana Altman has been the head coach at Oregon, also known as every year that Matt Knight Arena has been open. I took the picture you see at tip-off a week ago on Sunday for the Washington State game. That's the student section. I'm fairly certain that student tickets are easy to come by.

To begin the season, Oregon racked up 13 straight wins and was ranked tenth in the country. Their home conference opener (everyone has three home openers a year- there's the first exhibition game, the first non-league game, and the first league game) was right after their first loss of the season, they were 13-1, ranked 17th, and 1-1 in league entering that game- and it didn't come close to selling out. 8,415 showed up, or slightly more than half of MKA's capacity. That's not what a good basketball fan base does.

The Wazzu game was about smack average for Oregon attendance for conference home games this year, with 8,702 of us there. But entering that game, the Ducks were still considered an NCAA tournament bubble team (they still are) with 18 wins, having won two in a row (Oregon State and Washington). If you've paid any sort of attention to Oregon basketball the past 20 years, then you're rather aware that just being in the NCAA tournament discussion at the end of February is an accomplishment. I'm aware that every major college basketball program gets to go to some sort of postseason tournament nowadays. Even if you finish under 500, the CBI will take you (and there's a reason it's nicknamed the “Cash Buy-In” Tournament-
you actually have to pay to play in it).


Yet, Oregon has only broken more than 10,000 at a home basketball game twice this season. But even the Civil War against Oregon State didn't sell out- that had 10,013. The highest home attendance was USC, with 11,178, and that's only because it was Phil Knight Bobblehead Night. Tonight, it's a rare Tuesday game as they host Arizona State in the next-to-final home game of the season. They have 20 wins and are now, in some bracketologists minds, in the tournament. A win over the Sun Devils will obviously help that idea, and an upset on senior day against Arizona, who's the regular season conference champion and ranked third in the country, will all but guarantee it. Now the joint will be jumping on Sunday afternoon. The problem is, most of those fans will be attending their first Duck home basketball game of the season- even if they're students.

There are plenty of reasons why attendance is not as high as it could be. One is that all games, no matter the sport, are given start times designed for a television audience nowadays, not a home audience. Even a poorly watched game on the Pac-12 network will have more than 15,000 pairs of eyeballs on it, which is the approximate attendance capacity of Matt Knight Arena. Tonight's game, for instance, while on a Tuesday, has an 8pm Pacific time start on Fox Sports One. And that's not even the latest start time for a college basketball game tonight. The game before Oregon/Arizona State on FSO is Marquette and Providence, and that game starts at 9 pm Eastern. A 9 pm start on a Tuesday? Really? 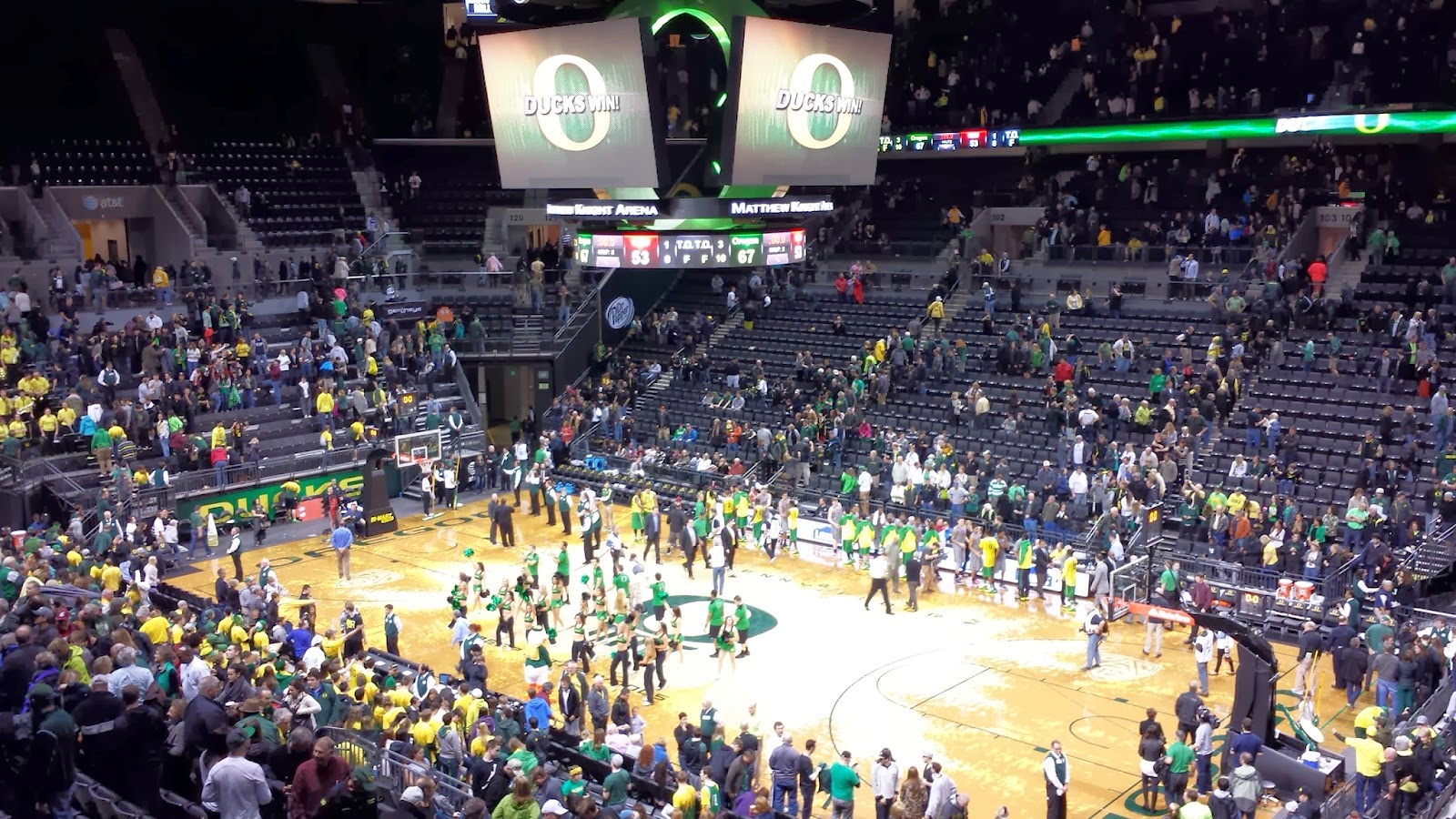 Reason number two is related to reason number one: if it's an 8 pm or 9 pm start and it's on teevee, why should you even bother going? If you watch the game in person, you've got to add an hour to get there and an hour to get home. And nobody just goes to bed immediately after being at a live sporting event (unless you're hammered). You've still got some adrenalin and have to revisit key plays in your mind, and maybe even find a teevee so you can watch the highlights and see if what you thought was a key play is really considered a key play- okay, maybe that's just me. But still. So an 8 or 9 pm starts means you're drifting off to sleep at 12:30, at the earliest. And if you've brought the kids to the game? Forget about calming them down for at least two hours after you get home.

Stay home and watch the game on teevee? Maybe you fall asleep watching it in the second half. As soon as the final buzzer sounds the kids, who are already in their pjs- are shuffled off to dreamland.

Reason number three is also related to reason number two: the cost. You've already bought the teevee and paid for cable. So watching the game is (kind of, sort of, not really if you give it any real thought) free. Whereas face value mid-level seats for the Oregon-Washington State game I went to were $32 apiece. My buddy, who is an ace in the secondary ticket market, picked up two for us for $13 apiece. That's two tickets for less than full price of one of them. We had two beers there- at $7 apiece. Having had a marvellous beef stew at his place with his wife and two year old before going to the game, we avoided buying $7 hot dogs and $5 popcorns and whatever else. Already having Oregon gear we needed no souveniers like a $25 shirt and a $30 hat. But if you're taking the kids? Or you need to eat? You're dropping a hundred bucks, easy, even if you get secondary tickets for $13 apiece. Four of those still becomes $52 right there.

And then there's parking. Matt Knight Arena is built more or less in a residential neighborhood. Arena parking is $10, minimum. Since we went to a Sunday game, the meters were off- once we were well away from the Arena. A 5 pm game on a Thursday? Good luck finding a parking spot even within ten blocks of the place.

We all can see increasing traffic day after day and mile after mile, wherever we go. But all cities, not just Eugene, basically refuse to help out except in big traffic crunches. Like football games. If you want traffic and pollution to decrease, you've got to give people legitimate, viable alternatives to get places. A couple of badly placed busses aren't going to do anything. There are plenty of people in big cities like San Francisco and especially New York who don't even own cars because there are convenient options for transport everywhere they go. 90 years ago every town, even Eugene, had trolleys and streetcars and busses and light rail nearly everywhere because only the really rich owned a car. We're headed back to those days because of increasing fuel and maintenance costs. The city who really invests in public transport all the time- not just for commuters or football games- will lead in this rebirth. Saying you have a great bus system but basically only having six busses for the entire city at least one day a week- and just flat shutting down on holidays- is not a solution. I look at all these road projects everywhere and I think that in ten years, those shiny roads will still be shiny new roads, because gas is going to be $12 a gallon and nobody will drive- and then everybody will complain how there are no good transit systems. It's not like nobody didn't tell you this was going to happen.

Anyway, the point is, Oregon's not a basketball school until they sell out the games against Washington State. Hell, even the football team has trouble selling out against Washington State. But I don't think anything's going to change in either case, and I'll continue to be able to take empty arena pictures for a long time- especially when gas hits $12 a gallon. It'll still bother me, but at least the basketball seats will still be cheap. 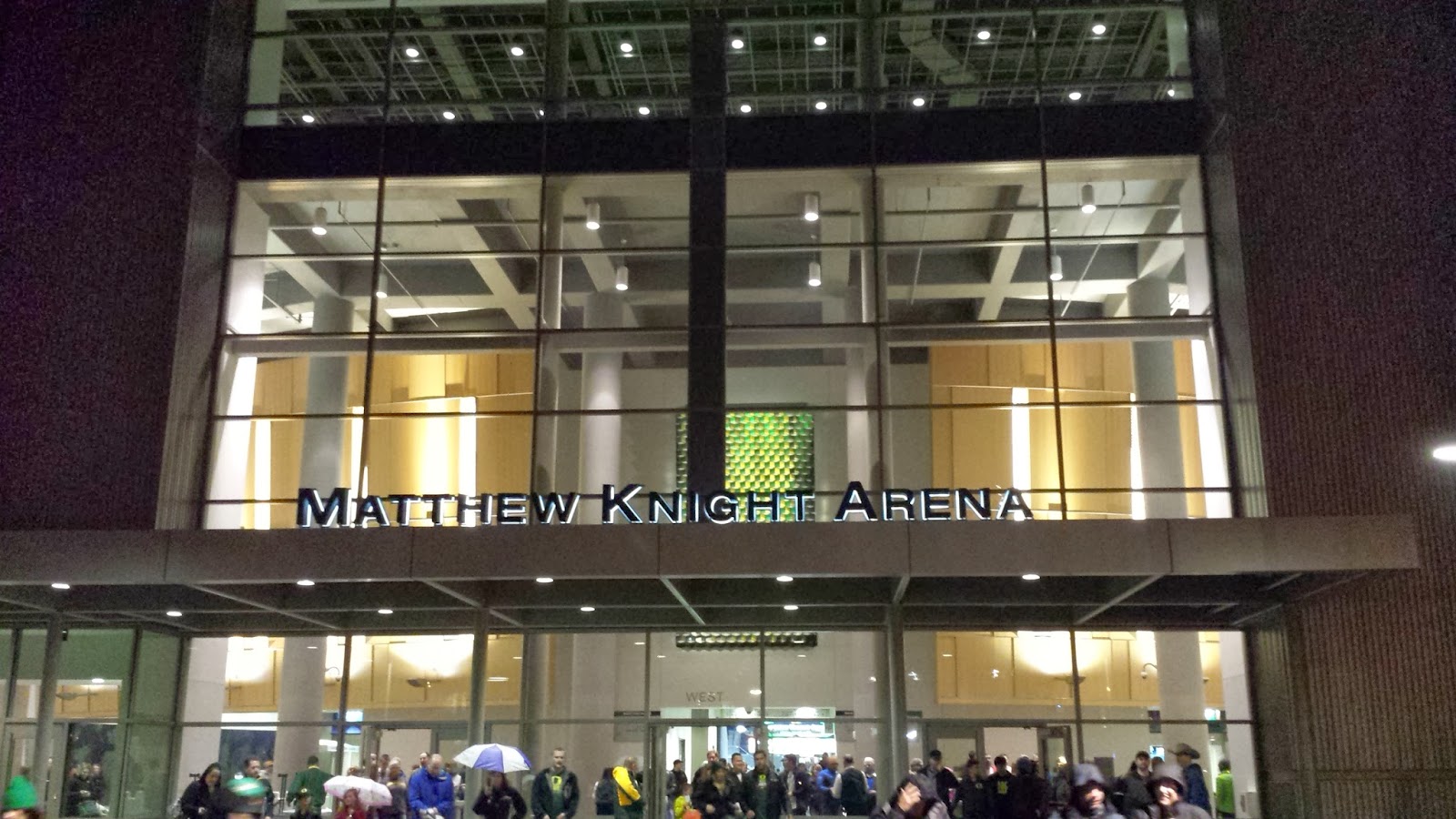 photos not taken by me courtesy of: oregonencyclopedia.org,
Posted by Alex D at 4:11 PM