Game of Thrones and Why Spoilers May Not Matter 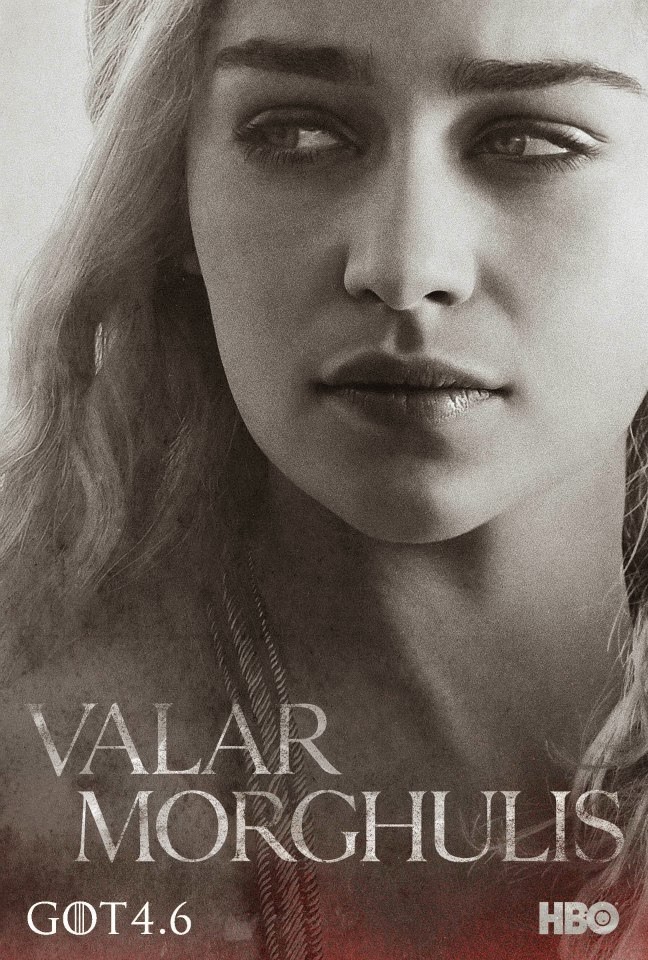 (A few readers suggested I record audio versions of my columns and upload them. So I tried it. Here's the link to this one. Let me know what you think!)

I'm a little late on the whole Game of Thrones train, seeing as how I didn't have the ability to watch HBO on a regular basis until relatively recently. Then there was binge viewing, but I'm still very confused. As a result, my names for the characters include “Wait, is this a different guy with the same beard than the other guy?” and “Oh, this guy again! How is he involved?” and “The kid who looks like Denny Laine,” and “Are you sure that this is a different guy with the same beard as the other guy?” and so on and so forth.

Like anybody who's watched, I'm looking forward to Sunday's season four premiere, but at the same point there's part of me that thinks that if I really wanted to know what happened, shouldn't I have started reading the books by now? I mean, there are really no spoilers for this season if you've already picked up a kindle or that old-fashioned glued together paper device that apparently I am the only one to bring on an airplane these days.

Side note, I may be the only guy with a 900-page hardcover book at the airport, but I see all sorts of things in an airport and on planes that I never see outside of those areas anymore. Like people reading USA Today. I suppose people do read USA Today on a regular basis, (and if you're employed by said Gannett newspaper, good for you!) but I personally don't know anybody who does. I remember when USA Today was unveiled back in the mid-80's, and it seemed kind of weird and unnecessary even then. I mean, the New York Times and LA Times do national editions every day, and they're right next to USA Today at every airport kiosk, right beside the six ounce bag of yogurt raisins that costs eight dollars. It really seems like USA Today was invented for the airport. If you're connecting in Dallas, maybe you don't want to read the Star-Telegram while you wait for your flight to Minneapolis, so you go with USA Today. I personally would pick up that Star-Telegram so I could find some interesting Texas factoid to share with the people I'm meeting in Minneapolis. Actually, that's a lie. I was in the Dallas airport waiting for a connecting flight (not to Minneapolis), and I read my 900-page book in between laps (yep, I'm also that guy who walks the airport for hours just to have something to do) so I didn't fall asleep.

Anyway, back to GoT (does everything have to be an abbreviation nowadays? Why can't we just call it “Westeros” and be done with it? We're more or less referring to another country anyway). It seems like this is a perfect example of people wanting at least some mystery in their lives. Or laziness, I can't be certain. The mystery part comes from knowing that the answers to what happens in Season Four are already out there, and plenty of people already know them. These are no doubt people who feel far superior to us peasants. And to them I say, good for you. Hurrah. I've always been “the book is far better than the movie” guy, but I try not to shove it around too much. What I tend to say is something like, “If you liked the movie, you'll love the book! While that one scene is awesome in the movie, in the book you get the internal dialogue and it creates much more depth.” Things like that.

But along those lines, I need to point something out that I haven't seen in any of the previews for season four- at least that I can remember- and that is there is no guarantee that they'll follow the books to the letter. Yeah, they do have the writer, George R. R. Martin (and he'll always be “the other George Martin” to me) as a creative consultant, but that doesn't necessarily mean anything. I keep thinking of the original James Bond books by Ian Fleming. They started tinkering with the plots very early on in the film adaptations, and by “You Only Live Twice,” they pretty much kept that it took place in Japan and that Bond was getting help from the Japanese Secret Service. The rocket that devoured other rockets? Little Nellie? The massive volcano hideout (at the time the largest movie set in existence)? Not even close to the book. And don't even get me started on “Moonraker.” Even for “The Spy Who Loved Me” they just kept the title and threw everything else out. (Here's the plot for the book and the movie. You can see for yourself why it became a submarine caper- and basically a remake of “You Only Live Twice.”) At least in “Moonraker” they kept the name of the villain (Hugo Drax) and the gambling sequence (although it's early in the film, in the book I'm pretty sure it's the climax).

I understand this is a teevee series and not a movie, so they can keep in some of the more minor characters and plot points that movies usually throw out. But even in teevee series adaptations there are differences, because teevee people think that their imagination is superior to the person who created these characters and basically lived with them for years as they created a series of books. This is pretty much why I am a huge Sherlock Holmes fan but haven't watched more than a few minutes of either new modernized version. Why mess with perfection and the great imagery of turn-of-the-century London that Sir Arthur Conan Doyle captured? So Sherlock Holmes can use an iPhone? Give me a break. But if it gets people to read the books- and then watch Jeremy Brett as Holmes and realize who the best Sherlock of all time is- then I'm all for it.

The real reason I'm not going to read the Westeros books is because most of what I've seen in the series can be relatable to something that actually happened (White Walkers, dragons, and witchcraft excepted). “Come on now,” you say, “Who would build a wall that massive for protection in real life?” To which I reply, “You haven't thought about tourist attractions in China recently, have you?” The fight for a throne from multiple fronts is real and happened countless times throughout the centuries throughout the world- we just read the history books and accept whoever is on the throne because winners write history, not the losers. When a king died, there was always a question of who would succeed him, and if that king had gotten on the throne via unscrupulous means, the family of the previous king would always put a claim in. As well as the late king's brothers, and the son of the king, and opportunists, and so on and so forth.

This is why democracy exists now and there are fewer civil wars nowadays, folks. The Founding Fathers didn't want this to happen in their new country, so they reached back for something that the Greeks invented two thousand years earlier in order to avoid strife like that. They didn't expect corporations to buy that democracy, but that's a completely different subject. Hell, corporations didn't exist when America was founded because the only people who could have money of that amount was the king and his court. Again, different topic.

So part of me doesn't understand why there isn't a major multi-part teevee series in the works about this stuff actually happening in real life, whether it's England or France or Spain. And the other part of me figures that plenty of things that happened in the Westeros books have gotten changed (especially considering that the book series isn't even finished), and those who have read them will get ticked off when those things start happening. So I'm going to stick to watching the series and not reading the books, and that's why I won't be at all surprised when we find out that Daenerys Targaryen has her headquarters in a hollowed-out volcano.
photos courtesy: Game of Thrones Facebook page, filmdump.com
Posted by Alex D at 3:20 PM