Roger Bannister, and is The Impossible Ever Ordinary?

Think of airplanes. Thousands of successful flights happen every day, so much so that airplane flights only are interesting nowadays when they don't land successfully. Or disappear. Yet, every time an aircraft takes off and lands... it's a little bit of a miracle. Man has dreamed of flying since the first time a long-ago ancestor looked at those winged things soaring above them and thought, “I want to do that.” Thousands, perhaps millions of inventors tried to make it happen. Balloons and gliders happened, but powered flight did not exist until 111 years ago. Now, you are always within an airport, or, at the least, an airstrip. The impossible has become ordinary. But if you think of the physics and the dynamics and how long it took for it to happen once... it's a miracle every time something goes up and down successfully.

There are thousands of these occurrences in everyday life that we ignore all the time. Like the fact that we live in surroundings a thousand times more luxurious and comfortable than any King's Castle between the dawn of civilization and the invention of the electric light bulb. We have easy access to more exotic foods than any ancient leader that you can think of. When temperatures rise, we can make it cold inside if we want to with the touch of a button. Even not counting airplanes, we can go farther in a day than many millions of people travelled in their entire lives.

And then there's the four-minute mile. Before May 6th, 1954, no human had run so fast that they could go 5,280 feet in less than four minutes. There are claims that people did so in the 1800's and even the 1700's, but you'd think that if one guy did it, then somebody else would try and beat them at it almost immediately, and when timers came into existence, then a sub-four minute mile would be old hat.

Because that's what happened after Roger Bannister ran a mile in 3:59.4 at Oxford on May 6th, 1954. He held the record for only 46 days until Australian John Landy, Bannister's main competitor in the under-4 minute mile challenge, beat him by a second and a half. Bannister held the record a month and a half, which is still the shortest time anyone has held the mile record since they started keeping track of such things. 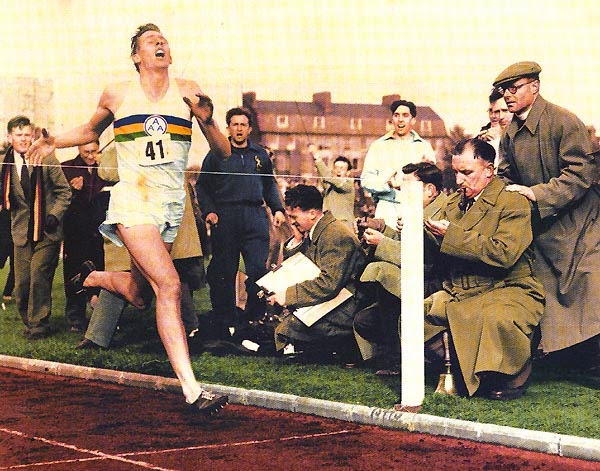 Roger Bannister's record-setting performance gets shrugged off nowadays, yet he opened the door for every runner to run a sub-four. Before Bannister, more than a handful of people thought that if a man ran a sub-four, he would die because he would have exceeded human limits. But when the world record was 4:01.4, and had been for nine years, what's another couple of seconds?

If World War Two had not occurred, it seems highly likely that the first man to official go sub-four would have been a Swede, either Gunder Hagg or Arne Andersson, who had gotten the record to that 4:01.4 in the closing days of the war (and their story really needs to become a book). Landy, the Australian, had run 4:02 several times in the early days of 1954. But Bannister was the man to break the mark for the first time.

And 60 years later, nobody blinks when a man runs a mile in less than four minutes. The record is 3.43, set nearly 15 years ago at this point, and no one has come remotely close to it since. This could be because runners concentrate almost entirely on metric distances at this point (Hicham El Guerrouj owns both records, and has since the last century), or maybe because, you know, drug testing and stuff like that. It's a theory.

I do not like that runners shrug off finishing a mile in 3:50-something like it is a disappointment. I think it is an astounding feat. I also do not take airplane rides for granted. When I think that I woke up in Oregon and now I'm in Kansas City, or Hawaii... that's a pretty impressive thing that happened- and nowadays, it happens all time. If you've ever run a 3:50 mile or taken a 3-thousand mile plane flight, take a minute and think about how many millions of people wished to do what you did and never got a chance. Better yet, take four minutes. Even better than that, take 3:59.4.