San Francisco Giants: May We Keep This Going?

Two months into the season, I'd say it's pretty clear that the San Francisco Giants have exceeded everyone's expectations at this point. Well, certainly mine. 17 games over .500, a 7 and a half game lead over the second-place Dodgers, an NL-best 19-9 in May... and that's with the presumed ace of the staff and the presumed starting first baseman on the disabled list.

(Worth noting that last year the Dodgers were also 7 and a half games out of first on this day, and Don Mattingly was as good as fired if this kept up... and then they called up Yasiel Puig and the Dodgers caught fire, winning the division going away and making it to the NLCS for the first time since 1988. It is also worth noting that the Dodgers have nobody like Puig to call up and that the Giants are a much better team than the Diamondbacks squad that led the NL West on this day last year. But that the Dodgers easily have the potential to do exactly what they did last year is very much worth noting. And worrisome.)

“Presumed” is the apt word for those two. For while Matt Cain has his $100-million contract and a perfect game to his credit, and was the best pitcher on the staff for the 2012 World Series winners... he has just one win this season and a hamstring injury means he's out for at least this week, again. While Brandon Belt still has a broken wrist after being hit by a pitch and won't return 'till July at the earliest.

When Belt does return, I highly doubt he's the starting first baseman any more. When Belt went down, the Giants moved Mike Morse to first, and the six-foot-six Morse has proved adept at the bag. He is right handed, which is always a negative for a first baseman (a lefty can stretch out and keep his glove in a more positive location no matter where the throw comes from- a righty can more easily get himself in an awkward position), but it means there's no chance he'll be lifted for a defensive replacement in the late innings- and thus lose his very valuable bat. Belt was the starting left fielder during that aforementioned 2012 World Series run, and I imagine he'll be back there... whenever he does return.

As for Cain, the man has, as I've mentioned many times, just one win on the season. His ERA is solid, it just seems like once again the Giants don't score when he's on the hill (or even when it's his turn to start- Yusmeiro Petit once again took Cain's spot on Saturday, and it was the only day this week the team was blanked- although Petit was involved in a little history. The presumed- there's that word again- next phenom for the Cards, Oscar Taveras, mashed one off Peitit for his first career homer- and hit- in his second careerat bat). While Madison Bumgarner is the “top man” in the Giants rotation and went 5-0 in May, I'd have to call Tim Hudson the Giants ace right now. Although Hudson has missed one start (he is 38, after all), he went 7 innings in SF's 8-0 win over St. Louis on Sunday- the 9th time he's gone at least 7 in 11 starts- and has an ERA of 1.75, second lowest in the league. Obviously defense behind him has something to do with the low ERA, but Hudson knows how to pitch.

It reminds me of a question once posed to a veteran pitcher. I can't remember the pitcher's name, so I don't even know if the exchange was even true, but it went like this: A reporter asked if the pitcher would like to throw a perfect game by striking out all 27 batters on 3 pitches each (an 81 pitch game). The pitcher replied that he didn't want to throw that many pitches. He'd prefer a perfect game with 27 pitches and 27 groundouts. When I first heard that story as a kid, I thought- “Well, that's dumb- if you're going to throw a perfect game, why not smoke everybody?” And later, as I kept going back to it in my mind, I realized that the pitcher was correct- an out is an out is an out. It doesn't matter how you get them, so long as you get them. A first-pitch ground ball is so much better for a pitcher than three strikes. It's fewer pitches, so it means you can pitch better for longer. And that's what Tim Hudson does. He doesn't pitch for the strikeout, he pitches to get the batter to ground to Brandon Crawford at short, or pop it up to Angel Pagan in center. An out is an out is an out. That's how a 38 year old has a 1.75 ERA.

The fantastic part about Matt Cain and not having more than one win at this point is that it doesn't even appear as if San Francisco needs him to be any good right now. Bumgarner, Hudson, a rejuvenated Ryan Vogelsong, and Petit are making Cain's comeback that much less important (sorry, Lincecum). So when he does return, he'll have thrown fewer pitches and innings than those guys, which means he'll (hopefully) be able to provide a spark and a lift when those guys get tired or what have you late in the season (especially August and September in a pennant race).

It should be worth noting that the Giants may end up with too many first baseman this season. When Belt returns then Bruce Bochy will have to make a decision about Morse- but then there's this Buster Posey fellow. Posey missed three of the four games in St. Louis with back problems, which is never good for a catcher. What do they do if Posey just can't catch on a regular basis anymore? Put Morse back in left? You can't let Belt ride the pine. You can't bench Morse, he's wayyyy too valuable at the dish. And benching Posey is unthinkable. You can only put one of them in left field, because Angel Pagan is absolutely the center fielder and Hunter Pence has publicly said he'd basically cry if he didn't start in right field every day. And that's also conveniently forgetting that Pablo Sandoval is not going to play third base forever. Schnikes, this is looking like my fantasy baseball team, where I have three first basemen who can do nothing but play first.

Anyway, that's a dilemma for another day. Still three games left on this road trip, against the Red Stockings starting Tuesday, and then ten straight by the bay- the Mets, the Nationals, and the Rockies. The Rockies again? Feels like they're on the schedule every other week. And it's pretty much true- there's only been one two-week span this year where the Giants haven't played the Rockies. But after this series, SF won't play them till August.

August is two months away. Maybe Matt Cain will have two wins by then. And the first baseman thing will be figured out. I won't mind if neither thing happens, so long as this team is still exceeding expectations. 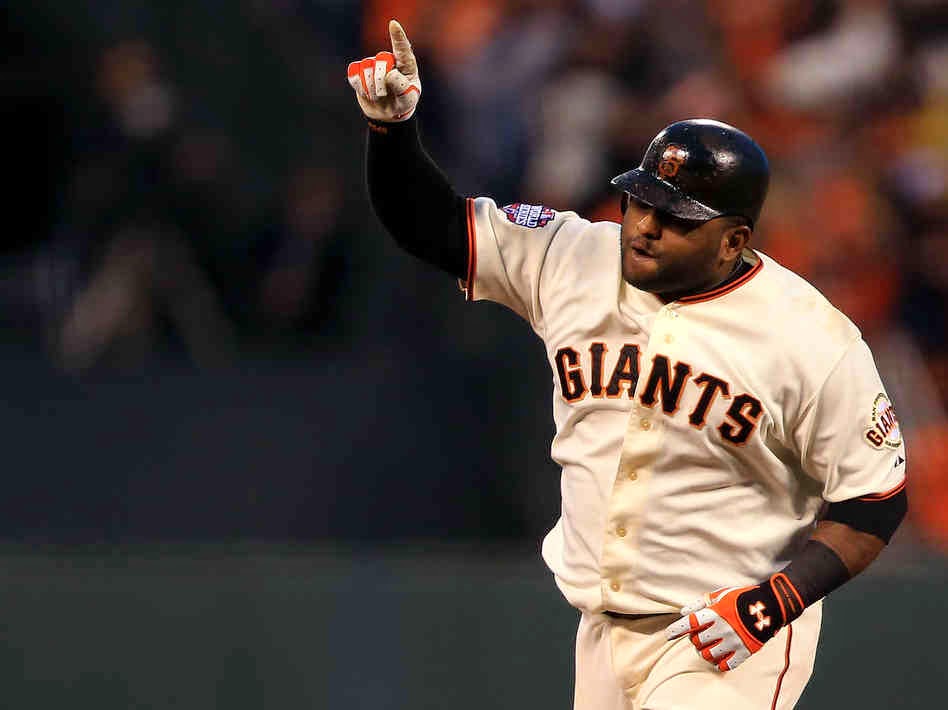