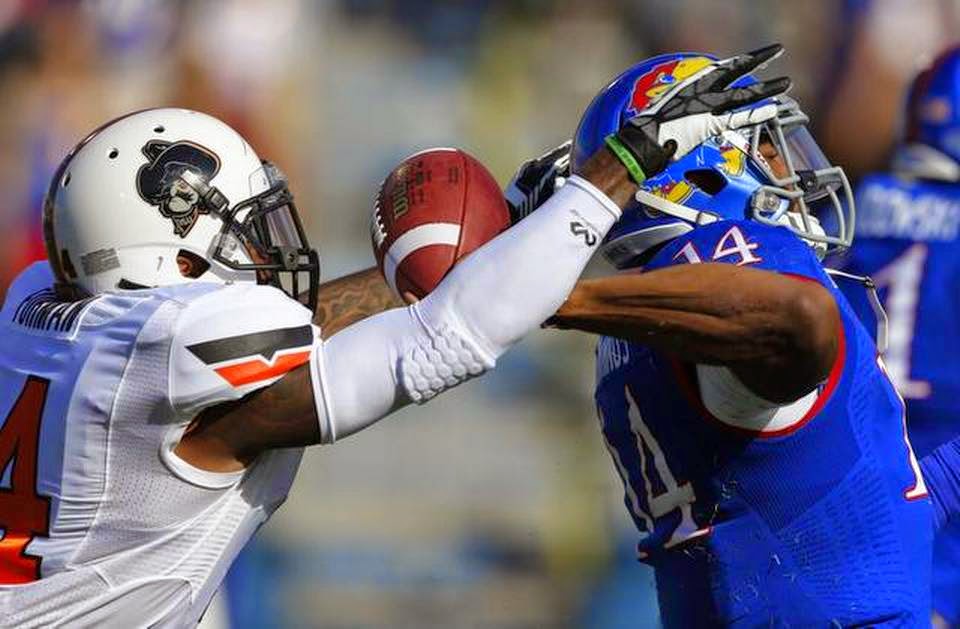 “KU has lost 26-consecutive true road games and 29 games away from Lawrence overall.”

This is not from a Texas Tech Red Raider fan site lobbing bricks at the Kansas Jayhawks in anticipation of Saturday’s meeting in Lubbock between two teams that are 2-4 and 0-3 in the Big 12 (it’s a 2:30 pm CT kick on Fox Sports Net, I know you’ve already set the DVR).

This is also not a quote from any media outlet that covers KU, who in the interest of fairness and journalistic integrity note all relevant statistics, warts and all.

No, this quote is from the one place that is basically required to spin everything that happens to Kansas football in a positive light, the weekly media release. By the school. Approved by the program. It is entirely possible that it is seen by interim head coach Clint Bowen before we get a chance to see it. And that’s in the weekly media release.

Believe it or not, there is actually some positive spin in that quote. Did you spot it? It’s the part where it implies that KU really hasn’t lost 29 consecutive away games, because three of those games are considered “neutral location” contests.

This, clearly, is the positive spin of a program that if it isn’t at rock bottom, it can positively reach out and touch it. “We’ve really only lost 26 road games” is flat-out delusional talk. You’ve lost 29 straight. I speak now as an alum, owning up to the truth. We’ve lost 29 straight.

I looked it up. KU last won on the road- okay, fine, “away from Lawrence” on September 12th, Two thousand and NINE. In El Paso, against UTEP.  The final score was 34-7. On 9/12/09, Mark Mangino was still KU’s head coach (it was his last season). Todd freaking Reesing was the starting QB. And get this- KU was actually ranked. They were 24th. The win, in the second week of the season, was part of a five-game win streak to start the ’09 campaign, and coming off their second consecutive bowl season and win (they beat Minnesota in the Copper Bowl in ’08, and of course won the Orange Bowl the season before), there was of course plenty of hope that this was part of the Jayhawks resurgence.

It wasn’t, as you well know. After winning five straight to start ‘09, KU lost seven straight to end the season. Mangino resigned under threat of being fired for “conduct detrimental to the university,” although apparently treating players like dirt is okay when you’re winning.

Then they hired Turner Gill. You may recall how well that worked. Then they hired Charlie Weis. You know how well that worked. Now we’re on Clint Bowen. It has been more than five years since KU has won a road game. This is their last real chance to break the streak this year, because KU’s last three road games are against currently ranked opponents. And not just ranked teams, but Top-15 teams (#4 Baylor, #11 Oklahoma, and #14 Kansas State. Although how the Mildcats are ranked 14th is beyond me. They came close to Auburn, sure, but they’ve played awful teams otherwise. They’re at Oklahoma this week, so they oughta be out of the Top-15 the next time the polls are released). It’s not looking good.

Not to add insult to injury (don’t forget this started with a quote from a KU-sanctioned press release), but can you recall those three neutral site games that KU lost that makes Jayhawk staff claim the losing streak is “really” only 26 games? They weren’t bowl games, obviously. They were the final three contests against Missouri, at Arrowhead Stadium. To which I say: Screw Mizzou!  (Any excuse to say “Screw Mizzou!” is a good one.)

Barring some sort of offensive firepower miracle, KU will lose their 30th consecutive “away from home” game in Lubbock. I don’t know what the NCAA record is for longest away losing streak, but I feel confident that the KU media guide will not tell me how close they are to owning that record. But I’ve been surprised before.
photos courtesy: kansas.com, celebritybabyscoop.com (don't judge, that's where Google search led me)
Posted by Alex D at 9:00 AM