My San Francisco Giants NLCS Game Five: I Had To Write It Down 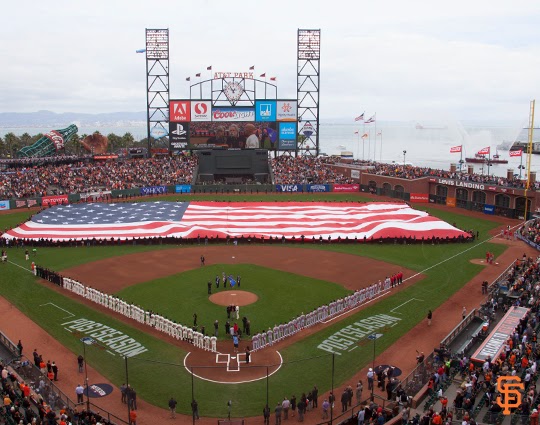 Come along with me as we go to watch the San Francisco Giants take on the St Louis Cardinals in Game Five of the NLCS on October 16th...  We can't leave until four o'clock because we're going with one of my friends who can't get out of work until then. That's okay? All right. We're now in the city and we're near AT&T Park...

Hmm, parking around the park is more intricate than I thought it would be.

Top 1st inning: Hmm, every parking space around here is free, but limited to two hours. Well, that makes sense, I guess.

Bottom 1st inning: I have never parked on the street in downtown SF. I think that’s because there’s never been a place to park in downtown SF at 5:30pm. There is today.

Top 3rd inning: Hey, that wasn’t so far to walk to the park. Got to keep that in mind for next year!

What’s that “aahhhhh” sound we're hearing from the stadium? The Cardinals must have scored.

Walking around the park, on the walkway between the right field bleachers and McCovey Cove, the thought flashes through my mind that we ought to stay out here for the bottom of the third, in case the Giants hit a homer. It is immediately followed by the thought that the Giants haven’t homered all series, and they probably won’t start now. I don’t say anything. We continue on the walkway and go into the dugout store on the 1st base line.

Bottom 3rd inning: Joe Panik hits the Giants' first homer of the series onto the walkway between the right field bleachers and McCovey Cove. Loud applause and cheering inside the store as the Giants take the lead.

4th inning: We step into The Lucky Strike just as Tony Cruz mashes a home run to give the Cardinals the lead, again. We walk though and it seems all right, but all right is not good enough tonight. Especially after that home run. Maybe some bowling someday.

5th inning: After wandering the streets, the first beer is finally ordered at The Polo Grounds. Even though the place is packed, we find standing room at the bar between two giant teevees and not blocking anybody’s view. In addition, they notice and serve us quickly. They also apparently make their own rotating, seasonal beer, or at least have an agreement with a local brewer to make a few kegs with their name on it every now and again. We order it and though it is lighter than we would have liked, it doesn’t suck. We make a mental note to come back on a day when there isn’t a game, or even during a non-playoff game. Watching an away game there would be good as well. The Giants fail to score in the two innings we’re there, and we fail to find chairs. We move on.

My Google maps show that a place I’d like to try, Marlowe’s, is not far away. We decide to head that way, but are open to distractions. We are distracted by a sign alerting us to a bar three stories up, past a stairway that is manned by a bouncer-type at the bottom, although that feels more for show than anything else. We go up the stairs to find that The Alchemist has no teevees showing the game, so there are about a dozen people there, sipping custom very alcoholic drinks. Again, we make a note to come back and head back down the stairs. 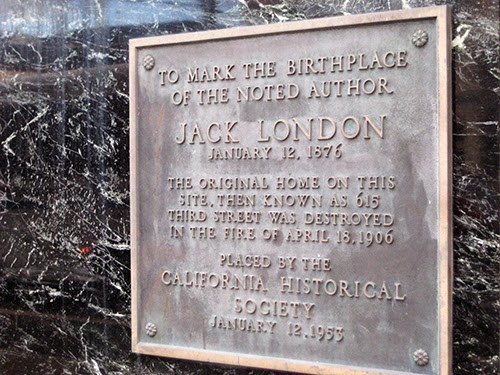 On that very same block, my attention is drawn to a plaque on a building. It is a historical marker, but the building is not old enough to warrant a designation such as this. I look closer, and see that I have just walked past Jack London's birthplace. It is too dark to take a picture, but the historical significance of the area- and the night- continues to grow in my mind.

We wander in the direction of Marlowe’s but are drawn in by The Brickhouse, a seemingly old bar in a seemingly old building. If they’ve faked it to look like they’ve been there forever, they’ve done a hell of a job. Any business on a classic San Francisco-named street like Brannan just seems like it’s been there forever. (It opened in 2001, but I don’t know how old the building is.)

When I hang out with certain people, there seems to be a certain magic in the events that happen. I could go for hours on the fortuitous happenings that occur while hanging out with certain people. We could have had a chance at Panik’s home run, but I didn’t listen to the little voice. This time, we listen to the little voice and go into the Brickhouse…. To find empty seats in a prime location at a long communal table just across from the bar and in front of the biggest teevee in the place.  After making sure our luck has held and the seats are vacant, we sit down and get acquainted with our friendly neighbors while having beer. It is the 7th inning.

8th inning: Mike Morse happens. We order food, anticipating that since it's tie game and the Giants are involved, we may be a while.

I had told another friend of mine who is an Uber driver that we would be wandering about near the ballpark, and would let him know when we settled on a place. Obviously, the Brickhouse qualified as a settling-in place. The top of the 9th inning is just about to occur when a person comes in and stops next to my chair. It’s him, and also by some marvelous happenstance, now the seat next to me is open, which he occupies.

The luck seems to turn when he shows. In a 3-all game, Casilla has two on and one out, then the bases are loaded with two out. Casilla’s night is done, and Jeremy Affeldt comes in and after a stomach-churning at bat, gets a grounder right back to him. He sprints to first to tag the bag for the final out. He is as aware as we are that seemingly easy plays have not been easy in the late innings in this series.

Bottom of the 9th: Pablo opens with a single and Bruce Bochy sends in a pinch-runner. You don’t remove Pablo unless you’re going for it right then and there, and if it doesn’t work you now have lost a big bat and a quality fielder. Bochy is going for it. Pence flies out and the pinch-runner does not move. Belt singles and now it’s first and second with one out. A double play sends the game to extras, and Pablo is not available.

When Travis Ishikawa came to bat I was surprised. Bochy usually double-switches in the late innings to get a better left fielder in there. This game he did not. He also does not pinch-hit for Travis’ light bat. Travis does not let him down. When first hit, I thought it was a double off the bricks and the decision to pinch-run for Pablo was the right one. As it turned out, of course, the pinch-runner was not necessary.

The Uber driver taped the final pitch. I got a little excited.

Our food comes mere minutes before the bar is filled with Giants fans exiting the ballpark. The people next to us buy us beer congratulate us on our good timing. A guy in full Giants gear sits across the table from me and says deadpan, "Did anything happen?" "Not really," I reply.

It takes us longer to get the check then it did to do anything else inside the Brickhouse. That place is definitely worth a return trip.  We exit and begin heading back to the car, still brimming with excitement from the game. We intentionally avoid the area right next to the ballpark, because we can already hear helicopters and sirens. The energy is carrying down the side streets to us. It feels like New Year's Eve. We chat with excited Giants fans on the street. Thumbs ups and high-fives are regular occurrences.

It is not time to leave yet. We make one extra turn and go into Katie O'Brien's. It is full but not crazy full. After a fairly easy trip to the lavatories, we look for seats, and there is an empty booth. We nab that, and get drinks. The buzz of the finish is so palpable that the bar patrons cheer the highlights. That never happens.

After a final beer, it is time to go. We turn the wrong way and spend a few extra minutes walking the streets of downtown San Francisco. Even the homeless guys are talking to themselves about the Giants. They are trying to sleep lying on a block that's being rebuilt, so no one will bother them for sleeping in front of a building. They are lying against the fences at a construction site. Many don't have shoes. It is a part of the city that is ignored in these days of prosperity. Thousands of people have spent hundreds of dollars tonight to cheer for people they don't know who playing a game. If they gave just part of their money to help the plight of these men, it seems everyone would be better off.

It is a sobering reminder of what lurks in the shadows. A pennant and a trip to the World Series doesn't seem like much as we get in the car and start the drive back. 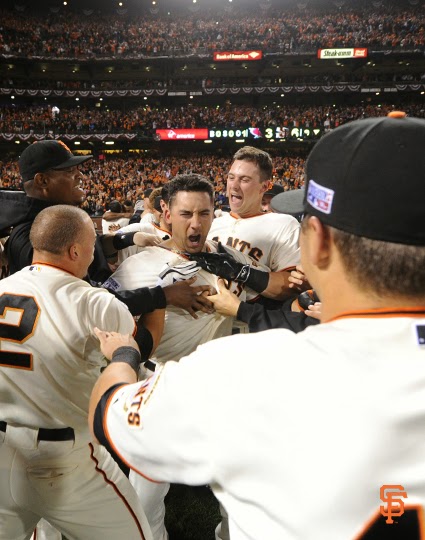