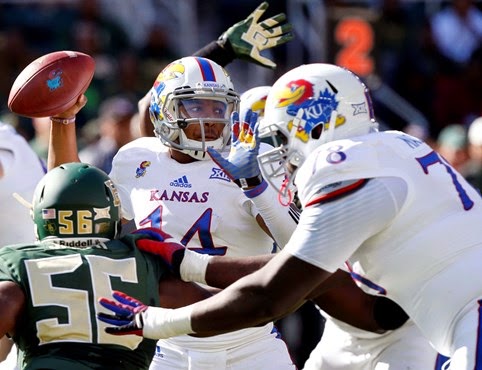 Skipped previewing the Kansas Jayhawks football game last week against Baylor because we all had better things to do than think about a guaranteed loss.

This is a home game for KU, which is nice, but what kind of advantage is it when there are barely 20,000 fans in a stadium that seats 50,000? In Clint Bowen’s first home game as interim head coach (second overall) the Hawks almost beat Oklahoma State, which is nice, but that was a month ago and they haven’t looked remotely competitive since.

This week is not only a home game, it’s easily KU’s last chance to win a football game this season. As a proud alum, I want to give them a chance in the rivalry game against Kansas State that ends the season, but…. Well, I suppose anything’s possible. Not likely, but possible.

Both KU and Iowa State come into this week’s game with identical 2-6 and 0-5 records. Both nearly lost by the same score last week, KU to Baylor 59-14, ISU to Oklahoma 60-14. Most other team stats are really comparable, except that ISU’s offense is averaging almost ten points a game more than the Hawks. I think teams without football programs are averaging more points per game than KU, so that’s really not a shocker.

Where KU has some sort of advantage, bizarrely, is defense. The Cyclones are giving up close to 38 points and 500 yards a game, KU is right around 32 and 450. I could throw numbers out that give the Hawks a fighting chance here, but I’ve been a KU football fan too long to try and talk myself into thinking victory before the game starts.

The Hawks could win, and it would be a nice thing for Clint Bowen and the rest of the team, who have been searching relentlessly for something that clicks long enough to put a W up there. But they could easily lose.

On the bright side…. It’s basketball season!