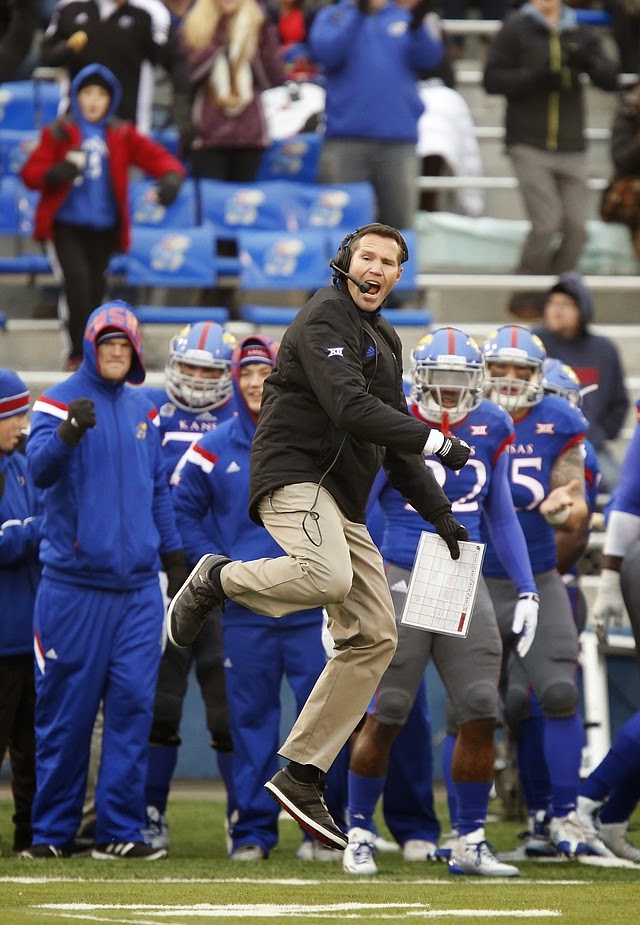 The almost should-have-been near upset of TCU would never have happened if Charlie Weis was still the Kansas Jayhawks head football coach. Clint Bowen deserved to keep the job before Saturday, he deserves to keep it just because of Saturday, and he will continue to find ways to deserve it the rest of the season.  Opposing coaches know it and everybody who’s seen KU football recently knows it, but the athletic director is still hedging. I suppose that's in case Peyton Manning decides to retire and become a college coach. But just in case you needed it spelled out, here are the five main reasons:

I don’t know of any potential coach out there who takes the success of KU football as personally as Clint Bowen. He wants the program to succeed as much as I do or any other long time KU fan. You can tell the losing and the jokes get to him. It can backfire because there’s a potential for burnout, but it would be nice if a KU football coach worked too hard.

Gary Barnett wants the KU job. Gary freaking Barnett. The former Colorado/Northwestern coach. Gary Barnett is 68. His reasoning as to why they should hire him? “Why shouldn’t they?” I’ll tell you why, Gary. Because you’re 68. You’re less than a decade younger than Bill Snyder (he’s 75). Also, Gary, you’re a recycled coach. Just like Charlie Weis. You know how well that worked. That is not a road to success.

On a side note that is probably more relevant than it isn't, Gary Barnett is now a color commentator on college football radio broadcasts. I listened to him a couple weeks ago. Not only did he and the play-by-play guy pronounce the Oregon quarterback's last name as "Mary-ohta" the entire game which is is wrong, wrong, wrong, (it's "Marr-ee-ohta") Barnett's "this is what I would do if I were the coach" thoughts were also less than correct. To put it nicely. Gary Barnett last coached a college game in 2005. Joe Paterno last coached a college game more recently than Gary Barnett. By six years. Joe Paterno died almost two years ago. And Gary Barnett wants to coach again. At Kansas.

Also, if Gary Barnett gets hired and things stay as they have been, in two years Gary Barnett gets fired and Clint Bowen is already head coach somewhere (like Washington State or Iowa State, etc. and so on). Then Bowen isn’t even an option. However, if Bowen gets hired, he has a built-in extra few years of leeway. At least, he better have.

If Clint Bowen builds KU into a success, we know where he’ll be in ten years. And twenty years. And 25 years. He’ll still be at KU, trying to make it even better. He. Will. Never. Leave. Lawrence-born, Lawrence-bred, Lawrence-educated, Lawrence-married, Lawrence-worked…. And Lawrence-buried. Bowen’s a lifer if you give him the opportunity.

Any other coordinator who wants to become a head coach might have better credentials on the field, but he’ll never have the passion and dedication to Kansas like Clint Bowen. Never. This was the job Clint was born to have.


photos courtesy: ljworld.com, celebritypost.net
Posted by Alex D at 9:30 AM