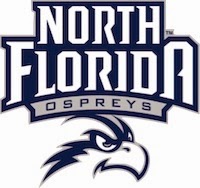 The NCAA Tournament begins Tuesday with the “First Four” games (Manhattan/Hampton get it started followed by BYU/Old Miss). No random team is deserving of your support more than the North Florida Ospreys, making their first tourney appearance ever, who play Robert Morris University in a 16-seed battle on Wednesday at about 6:40pm Eastern (3:40pm Pacific, 10:30pm at Westminster Abbey and 6:30am Wednesday morning if you’re in Perth). These games are mostly gratifying because it lets a 16-seed win a game.

I knew nothing about the Ospreys until they won the Atlantic Sun tournament more than a week ago, becoming one of the first teams in the field of 68. Just the name “North Florida Ospreys” seems like something you’d make up for a movie or TV show. Like their non-conference opponents would be Western University and UC-Sunnydale, and they’d be in the same conference as the Texas State Armadillos.

The University itself opened in 1972, meaning it started admitting students two years after the Beatles broke up and is younger than Kid Rock, Nathan Fillion, Amy Poehler, Ewan McGregor, Missy Elliott and Corey Feldman. It didn’t field teams until 1983, which means the athletics program is younger than Dwyane Wade, Danica Patrick, Seth Rogan, Anne Hathaway and Nicki Minaj.

It seems almost impossible in this day and age that a team can lead a DI basketball conference from day one, win the regular season and earn the right to host the conference tourney, then win said conference tourney. But that’s North Florida for you. You may have heard of them already if you’re a Purdue fan, because North Florida’s best win this year was beating the Boilermakers in West Lafayette, 73-70. As I’m not a fan of Purdue, I find this enjoyable.

The Ospreys have had the same coach since first transitioning to D-I ball in 2009, a fellow by the name of Matt Driscoll. I really don’t know why colleges bother going to D-I. Would you rather get pummeled by Duke (NFLA’s best-case scenario) or would you like to compete for national titles at a lower level? It’s a matter of what size fish in what size pond you’d rather be in. It almost makes sense for basketball because with smaller roster sizes there’s a chance to be competitive, sort of. Fortunately the Ospreys do not have a football team, although there is talk of adding one.

Here’s some unsolicited advice for NFLA. Uh, are those the approved initials? Are they actually NFL? Because that would be weird. Anyway. Don’t add a football team. It is a waste of time and money to add football these days. You will be terrible forever. Again, your best-case basketball scenario is losing to Duke. As it is you're going to make some bank just from being in the tournament. Ask fellow A-Sun Conference member Florida Gulf Coast University about that.

Here are four things you need to know about the Ospreys heading into Tuesday:


The school is located in Jacksonville.

Most famous alum is former Chiefs head coach Todd Haley (now with the Steelers), who lettered in golf for the Ospreys and helped them win a D-II championship. The golf team that year is in the school’s Hall of Fame, Haley isn’t there as an individual. He didn’t make All-America that year, but five of his teammates did. And the Chiefs once made him head coach. It all makes sense now.


The best player is Dallas Moore. The sophomore led the team in scoring and assists, shooting 48.8% from the floor. He was recruited by the “second-tier” Florida schools and his uncle, who he considers the man who taught him to strive for greatness, passed away from kidney disease just before the A-Sun tourney began.


The Student Union cost $50 million and is LEED-certified.

After the Tournament, what say we go to North Florida for a spell? The only $50 million dollar student union I’ve seen is at the University of Oregon and reserved for athletes.