Eugene, Oregon Wins 2021 Track and Field World Championships, But Was The Race Fair?

Track and field is a funny sport. The individual disciplines- the 100 meters, the shot put, the steeplechase, the javelin- are simple. If I run the same distance as you but do it faster, I win. If I throw the object further than you, I win. The simplicitycof it in a complex sports world is amazingly refreshing.

But because nothing can apparently be that simple, the governing bodies of the sport, be it the USATF or the IAAF or the Olympics, are incredibly complex behemoths that seem intent on being as difficult to figure out as the disciplines are simple to win. Unlike events on the track or field, which reward the fastest or strongest regardless of age or gender, the governing branches appear to be committees stacked on committees stacked on committees. It seems like they have to take a vote to decide whether they can take a vote.

Which makes Thursday’s announcement that Eugene, Oregon,  will be the host of the 2021 IAAF World’s Championships rather surprising. That Eugene is the first American city to host World's is not surprising. They had a strong bid for the 2019 event because Eugene is A.K.A.Track Town USA, with the classic and world-renown facility known as Hayward Field,

In one way, Eugene capturing the 2021 championships is a perfect example of the old boys club. There was no open bid for the event, it was just given to Eugene. This angered Swedes in Gothenburg, (yes, Swedes can get mad) who wanted the championships to celebrate the city’s 400th anniversary. Other cities were no doubt planning on bids and didn’t even have time to form exploratory committees so they can’t even start to get mad.

But in another way, it’s a perfect example of the complexity of the governing bodies of track and field. After Eugene didn’t land the 2019 championships (they went to Doha, Qatar, which means every human rights organization will protest this at some point, if they haven’t already), the IAAF invited the organizers to come learn what they could improve on. Because Eugene was already down the bidding road for world championships, the IAAF decided to keep them on that road but just switch the destination. As the world governing body of the sport, they can do that. And they did.

The complexity of the IAAF plus the familiarity of the previous Eugene bid let TrackTown win the race without any competition. The championships location committee, already knowing what Eugene would have done if they had won the 2019 event, took an exploratory vote for 2021 that would become final if it passed overwhelmingly. And it did. Eugene was led down the road and assured of the win. Just like, if you read between the lines, Qatar and the 2019 championships, which technically did go up for bid.

Does this smell not quite right? Of course it does. The thing is, every international sports governing body is tainted. FIFA comes to mind, as well as the Olympics committee. To say nothing of so-called private sports leagues, who are heavily subsidized by public money yet give next to none of it back directly to the community those sports are played. Roger Goodell and the NFL, anybody?  The bad taste in Sweden's mouth will pass. Because of this Gothenburg or Stockholm or somebody will get fast-tracked to host some other major track and field event. You watch. It's how this works.

In a way, it reminds me a bit of Watergate: Track Town would have won the 2021 bid anyway, they didn't need to rig the vote. Eugene- and Hayward Field- is the best place in America for top track and field. And that’s something no complex governing body can change, no matter how many committees have to vote. 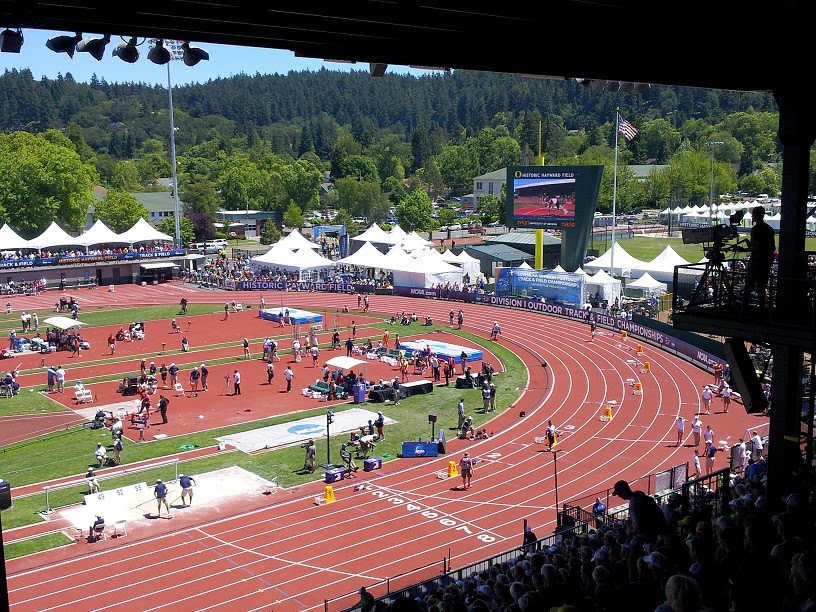 photo by the author
Posted by Alex D at 3:31 PM