David Letterman and the End of The Late Night Talk Show 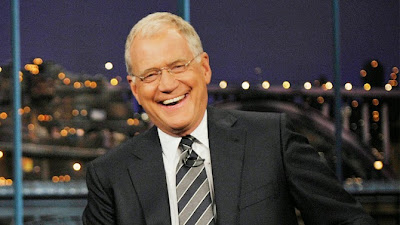 I remember the first time I saw David Letterman on television. It was the mid-1980’s, I was on vacation and my aunt and uncle had just gotten a VCR. My uncle occasionally watched Letterman, so we secretly timer-taped a show (an ordeal at the time) and put it on the next afternoon as a surprise treat.

I remember his reaction distinctly. He had been talking Letterman up. When we put it on, he said “Oh, I don’t really like him, he’s just the best thing on when I can’t sleep.”

I was a huge Johnny Carson fan at the time because I was getting into comedy, and Carson was the best place to watch new stand-up consistently at the time (remember: virtually no cable). After watching Carson be a genius, Dave was kind of hard to understand for 12-year-old me, even though his comedy in theory was more appealing to my generation. Well, the rest of my generation probably wasn’t listening to a lot of Smothers Brothers or Bob Newhart. But I was. Eventually I found more modern comedy- George Carlin had a lot to do with that- and slowly I began watching the NBC 11:30 to 1:30 block, aka Johnny and Dave, pretty regularly. I didn’t go to many parties as a teenager, why do you ask?

When Carson announced his retirement in 1991, NBC didn’t believe that Letterman could change his show to make it palatable for 11:30 and went with Jay Leno. I saw Leno do stand-up when I was 12, and he was phenomenal. (You’re going to have to trust me here. Leno’s standup in the mid-80’s was out of sight.) He was Carson’s permanent guest host so the decision was not wholly unexpected. I thought Dave deserved the show because he was clearly Johnny’s choice to replace him, but Leno was not as goofy as Dave was at the time. Dave promised he could do a proper 11:30 show and NBC didn’t believe him.

There is a lot of irony to David Letterman retiring now that the internet is a force. Dave’s early late-night run began when you could really only see his stuff if you stayed up and watched it when it aired, unless you knew somebody with a VCR- and they wanted to play the tape for you. His late-night stunts- jumping onto walls in a Velcro jumpsuit and wearing a suit made of Alka-Seltzer and getting dunked into water (Rice Krispies suit and milk, same idea as well) and elevator races- would have been perfect for today’s viral world.

More of the stunts had to do with Carson than you might think. When Carson got the rights to produce- and therefore choose- the program that followed The Tonight Show- (a deal negotiated by his lawyer extraordinaire Henry Bushkin- read Henry’s book if you’ve ever been even remotely interested in Carson) he gave the show to Letterman with plenty of caveats in the deal to ensure that Letterman wouldn’t copy Carson’s show and water down both shows as a result. This is incredibly funny in retrospect because at the time NBC had the only sustainable late-night franchises, cable basically didn’t exist, the internet was “the future” and very few people had a VCR to time-shift anything (or even invent the word time-shift). Anyway, the three biggest stipulations were:

One, no extended monologue. Johnny essentially demanded the rights to the seven-minute late-night monologue! This forced Dave to just do a few “remarks” and I believe helped in the creation of the “Top Ten,” a way to do lots of jokes on a topic but not in a monologue setting.

Two, a long-forgotten clause regarding guests called “21 and 8.” To preserve an idea of “exclusivity,” a guest that appeared on Carson couldn’t appear on Letterman for the next 21 days, and a guest on Letterman couldn’t appear on Carson for the next 8 days. Carson also had this clause for the early days of Saturday Night Live. Can you imagine if “21 and 8” still existed? A guest in New York often does Letterman, Fallon, Seth Myers and hosts SNL that week!

Three, Johnny forbid Dave to have a big band like Doc Severinsen and company. NBC didn’t give “Late Night” much of a budget anyway, so Letterman decided on a four-piece rock combo. In another budget move, they combined the role of sidekick and band leader with Paul Shaffer handling both roles.

Those clauses- and others- forced Letterman and his staff to get creative with his comedy and his guests. Lots of the people Letterman and his producers wanted as guests in the early days weren’t guys that Carson wanted anyway, so it wasn’t a huge deal. Chris Elliott wasn’t exactly on Carson’s wish list, you dig? (Paul and the World's Most Dangerous Band never played any Glen Miller, either.)

After Carson retired and Dave went to CBS, he extended the monologue, the band added a brass section and the stunt comedy slowly went away. The Late Show was the spiritual successor to Carson’s Tonight Show, never mind what NBC wants you to believe. Now that Dave is retiring, it’s obvious that he is the true last link to Carson. The Tonight Show used to be the only show you could see celebrities in a casual interview format. It therefore required Carson- and Jack Paar before him- to make conversation.

After Dave, that doesn’t exist. (Maybe Stephen Colbert will be more of a traditionalist than I am expecting he will be.)

A Talk Show emphasizes what? Talk. It does not emphasize lip synching or celebrity Pictionary or hula hoop contests.

A true talk show host can make any guest look good, and even mostly pretend to be interested in a terrible movie or sitcom. The most succinct and accurate thing I’ve ever heard about Carson as an interviewer is from Dave Barry’s new book, “Live Right and Find Happiness (Although Beer is Much Faster).”

As Barry explains, his first book, in 1982, had gotten some national recognition and he was invited to be on Carson. He writes, “I was on for seven minutes at the end of the show, and it went pretty well, because I was being interviewed by Johnny Carson, who could make any guest appear spontaneously funny, including Hitler.”

At a book signing/lunch with Barry not long ago, he explained that he had never been interviewed on a talk show before that Tonight Show appearance, and it went so easily he thought that all talk show interviews were like that. But after doing a few more interview appearances on similar shows, it became very obvious to Barry that it was a great interview because Carson was the one doing the interviewing.

He could not be more spot on. Carson didn’t need pre-arranged skits to make the guest look good. He just did that in seven minutes of sitting there talking. That’s what will go missing with the absence of David Letterman from late-night TV. In the beginning he just made people he liked look good. Now he makes everybody look good, but he’s the only one who still has that skill to that extent (and even then he’s a notch below Carson).

If you don’t believe me that late-night talk has changed forever, check the category description for Kimmel or Fallon or Meyers or Letterman or Conan O’Brien or anybody you like to watch who does a show like this. It’s not labeled as “talk” any more. It’s “comedy.”

Carson was funny, but it was about the conversation. Letterman believed the same thing. And that’s going to be the biggest black hole in late night.

And all of late-night “comedy” will become shows that are only worth watching when I can’t sleep. My uncle had it right, he was just 30 years too early.