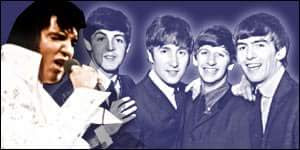 Why July 6th needs to be rock and roll day:

In the wee hours of July 6th 1954, Elvis recorded "That's All Right," his first official recording and breakout hit, at Sun Records. The evening session had been going poorly, and on a break the 19 year old began strumming it on his acoustic guitar to entertain himself.

The recently passed Scotty Moore joined in on electric guitar and so did bassist Bill Black. Sun Records founder and producer Sam Philips wasn't recording and got excited, so he had them do it again.

Within 3 days it was a hit on Memphis radio, and the legend began.

And on July 6th, 1957, a friend took aspiring guitarist James Paul McCartney to the Woolton Village Fete, a town festival. The friend knew a local band would be playing there, and he thought James might be a good fit for them.

After The Quarrymen played, the friend took James backstage. He met everyone in the band, including the leader. He borrowed a guitar and played "20 Flight Rock." They were all really impressed he knew all the words.

A few days later the leader of The Quarrymen, John Lennon, invited James to join the band.

So on July 6th, Elvis started his career, and Paul met John.