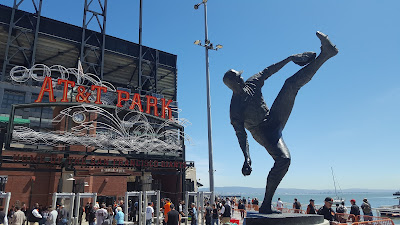 Stunningly, by the 4th of July several teams had already completed their scheduled home weekday day games for the year. It's the heart of the season and teams aren't giving people a really good excuse to play hooky, or the kids on summer break a reason to go to the park and not the wave pool.

There will be more weekday day games in the east next season because the new Collective Bargaining Agreement says "getaway" games where at least one of the teams has a game in the west the next day has to be a day game so they get in at a reasonable hour. Earlier this year, the Braves forced the Giants to play a night game in Atlanta when the Giants had a game in San Francisco the next day. Then the game got delayed by rain. So the Giants didn't get out of Atlanta until nearly 3 am and were toast the next day. Of course, the Giants have been toast the whole season so that probably didn't make a huge impact. But you damn well know that if it was the Braves themselves who had to play in the west the next day it would have been a day game. Starting it 2018, it has to be no matter what. I broke down the numbers of how many scheduled weekday day games each team had earlier this year.

My goal in making this list is to see as many weekday day games in as many different stadiums as possible between July 1st and September 29th, the final weekday of the 2017 regular season. Despite most weekday day games taking place only on Wednesday and Thursday, it's almost possible to get to every team's home ballpark. Almost. I don't count Labor Day as a weekday (so I don't have a game scheduled for that day), but I do have two authorized holiday exemptions where it doesn't matter what day of the week it is so long as it is a day game- and that's on National Holidays in the capital of the country. So that's where we begin...

Boston Red Sox at Toronto Blue Jays. The 150th birthday of Canada would have been an awesome time, I'm sure.

Toronto Blue Jays at New York Yankees. With a quick stop-off pilgrimage to the site of the Polo Grounds. Finnerty's, are you listening?

San Francisco Giants at Detroit Tigers. Four parks in five days. Not the ultimate way I want to plan a trip like this, but you gotta do what you gotta do.

Pittsburgh Pirates at Chicago Cubs. We will try and hit Wrigley a lot even if my head would've been spinning at this point by being in 5 stadiums in 5 different cities- and four straight- in 6 days.

Washington Nationals at Cincinnati Reds. The Reds always seem to have a few random weekday day games or "businessman specials," a throwback to the old days. I'm glad for it because it means I can easily get them in on this list.

Chicago Cubs at Atlanta Braves. The Braves have very few weekday day games this season (because they're too busy screwing over west coast teams as much as possible). Get there when you can. Also of note on the 19th, the A's and Giants both had weekday day games, the only time all year for both Bay Area teams.

Toronto Blue Jays at Boston Red Sox. The Red Sox also have very few weekday day games, so an early-morning flight from Hartsfield to Logan is in the offing. As the Braves originally started in Boston and won their only World Series in Boston while playing at Fenway Park, it's a historical back-to-back.

The Cubs hosted the White Sox for daygames in the Crosstown Series Monday the 24th and Tuesday the 25th. A maybe, but not required.

Baltimore Orioles at Tampa Bay Rays. The Rays are not very day-game friendly either. But they're better than the Orioles, who are lousy when it comes to weekday day games.

L.A. Angels at Cleveland Indians. Our best option this day since the Nats and Blue Jays have already been taken care of.

Atlanta Braves at Philadelphia Phillies. Another Monday "businessman's special." Probably be about 18 people at this game.

Arizona Diamondbacks at Chicago Cubs. Because when you can do the Chicago double....

Baltimore Orioles at L.A. Angels. The Angels are also terrible at having home weekday day games. Better than the Orioles, but that says very little.

Philadelphia Phillies at San Diego Padres. In sunny San Diego, this is their last scheduled weekday day game of the year and I have no idea why.

Milwaukee Brewers at San Francisco Giants. The only day game of the day, so an easy choice.

Arizona Diamondbacks at New York Mets. Not my ideal back-to-back, but not many options to get the Mets in here. Plus the Giants started in New York, so another historical back-to-back. The best way to do this probably means a red-eye out of San Francisco to get to New York around mid-morning (considering the time change) which means I would be super-loopy at this game. Makes the whole thing more surreal and Hunter S. Thompson-like, so what the hell.

Chicago White Sox at Minnesota Twins. The Twins built a no-roof park so they should host lots of day games... and they don't. 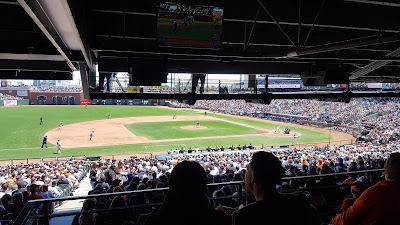 LA Angels at Oakland A's. Me and 12 of my closest friends.

Chicago White Sox at Kansas City Royals. The White Sox are on this list a lot. Also, the K is a fantastic place for a ballgame except that it's in the middle of nowhere.

New York Mets at Miami Marlins. There's a bobblehead museum here. Might be the best thing going this game.

Miami Marlins at Colorado Rockies. The Rockies have the 2nd-most home weekday day games of anybody this year, second only to the Cubs. But in order to get everyone else in, my only choice is to go to the last Rockies weekday day game of the year. At least they're on the list.

Cincinnati Reds at Chicago Cubs. The final weekday day game of the season is at Wrigley. It makes sense.

25 out of 30 teams in three months, that's pretty good. The one team I regret not getting to is the Pittsburgh Pirates, who by all accounts have a beautiful ballpark that should be seen in the daytime. But they have surprisingly few weekday day games. As it happens, out of all the NL Central teams, whose total weekday day game numbers are inflated thanks to playing the Cubs, the Pirates still only have 16 total weekday day games, home and away (the other non-Cub teams in the division- Milwaukee, Cincinnati, and St. Louis- have at least 20).

The Orioles are worse, because it was the week before Memorial Day. They have a few 3 pm starts, but that's mid-afternoon in my book, not daytime. The O's appear to be completely against weekday day games, and because they have a wonderful ballpark that should be seen in the daytime, this- again- doesn't make much sense to me.

An odd omission from this list are the Seattle Mariners. Safeco Field is fantastic! It's beautiful with the roof open and the sun shining in... yet the M's only have two non-Labor Day weekday day games after July 1st (coincidentally, the last one they're hosting the Orioles) which makes- you guessed it- no sense. August is the best time to be in Seattle.

Team number five we can't get to? The Rangers. This makes sense because Texas summers are absolutely brutal and they don't have a roof (this is why they want a new ballpark after just 20 years, because hell, we can get to the Astros and even the D-Backs, because Arizona summer heat is worse). They have only two day games in July, period, and two more in August. We could get to them but then we'd have to miss the Rockies. We're not missing any playoff teams this year. Sorry, Mariners.

photos by the author.