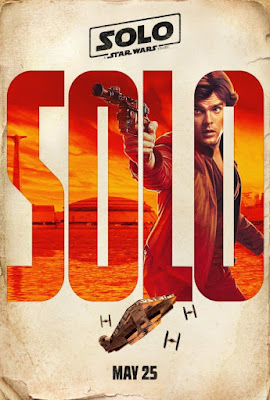 Look, I am going to see the Han Solo stand-alone movie and I never actually go to the theatre to see a movie anymore. So, let’s get that straight up front. But I am worried that the new Han Solo movie is going to absolutely screw up everything that we like about Han Solo.

Han Solo is awesome in part because he is mysterious. Where did he come from? How did he win the Millennium Falcon “fair and square” from Lando? What makes him able to shoot first and not have any problems about it? These are questions we have asked as a Star Wars watching people for more than 40 years.

He is a mysterious figure. He is one of the great mysterious figures of all time, like Clint Eastwood in 90% of his westerns, and the entire Steve McQueen filmography, and of course, Humphrey Bogart’s tour de force of Rick Blaine in Casablanca. It’s a great plot device to get you more interested in the character.

“We have a complete dossier on you: Richard Blaine, American, age 37. Cannot return to his country. The reason is a little vague.”

You bet it is, Major.

“I've often speculated why you don't return to America. Did you abscond with the church funds? Run off with a senator's wife? I like to think you killed a man. It's the Romantic in me.”

“It’s a combination of all three,” he replies, and thus you continue to wonder what makes the man tick.

Han Solo belongs in those same categories because we don’t know anything about him. We wonder, and it makes him more mysterious and therefore more awesome.

And very soon, in less than two hours, we will learn exactly what makes Han Solo tick and where he came from and what about the Falcon.

We will know everything about him.

And it will RUIN Han Solo.

He will be toast.

It would be like having a complete backstory about every character in The Great Escape. You know, the fantastic WWII prisoner of war breakout movie from 1963. We know bits and pieces about every character, but just enough to move the story along and create some drama. We don’t know everything. We do know that Charles Bronson’s Danny had a tunnel collapse on him so despite him being the best at digging tunnels he’s scared. That’s fine. That’s a plot device that’s key to the actual damn escape, so it’s part of the gig.

But we don’t know how James Garner’s Hendley came to be so good at scrounging. Nobody else does, either. It’s an aside. The guy the British know to be The Scrounger isn’t there, and they hear there’s an American named Hendley who’s very good. The exchange goes like this:

“What about Tommy Bristol?”
“No, but there's an American – Hendley”.
“Is he a scrounger, blackmailer?”
“MacDonald says he's the best.”
“Good.”

We don’t know about Jimmy Coburn and why the hell he’s an Australian with no accent and why Sedgewick is the ace manufacturer. He just is. The best mystery surrounding Sedgewick is his escape. He gets into town, steals a bicycle that’s too small for him, and cycles away. We cut back to him a few times in between the chaos and he’s just cycling along. Then he just shows up in Paris.

As for The Cooler King, Steve McQueen has a conversation with Ives while they’re in The Cooler where he mentions riding bikes, and Ives says “bicycles?” and Hilts says “No, motorcycles.” So you know he can ride before he tries to escape on one. The confusion by Ives and Hilts’ emphasis on correcting him, by the way, is also an intentional screenwriter device to get you to notice the interaction. Even though you may not have any use for knowing that right then, when Steve McQueen starts hopping barbed-wire fences at 70 miles an hour, you go “Ohhhhhhhhh!!!!” It’s a device most used by mystery writers, for if you mention a candlestick on page one, it damn well better be important to the plot by the end of it all.

Anyway, imagine if they did a prequel to The Great Escape and showed how Hilts became so good at riding motorcycles, and Hendley got so good at scrounging, and Bltythe (Donald Pleasance) as a mild-mannered guy who discovers he has a tremendous talent for forgery. (Oh man, I just gave Hollywood an idea, didn’t I? Forget I said anything.)

That movie would ruin The Great Escape. Absolutely destroy it. You’d have to pretend it doesn’t exist, like Slap Shot 2.

I am also extremely worried about Han Solo because Star Wars already did a bunch of movies explaining what happened before, and they ruined all the mystery and awesomeness of the stuff they were trying to show.

Before the prequels, when Obi-Wan said, “I fought with your father in The Clone Wars,” our imagination filled in the blank. This old man fought battles? With Luke’s father? How did they survive? What happened?

We wondered what kind of father Luke’s dad was. “He’s got too much of his father in him,” said aunt Beru. “Darth Vader killed your father,” said Obi-Wan. We wondered. We speculated. The mystery and the history made us want to know more about the story. When the big reveal happened, we realized what Obi-Wan meant. The mystery of how that happened made us want to know more.

And then the prequels happened, and we found out, and we immediately regretted it (well, I sure did).  Obi-Wan as a young man fights like Renton in Trainspotting. Luke’s dad is a stupid brat as kid, and an idiot as a young man.

We know about the Clone Wars and how clunky they are. The mystery, the off-hand remark of “I fought with your father in The Clone Wars” immediately reminds me of how bad the prequels are.

But that’s not all that worries me about the new Han Solo movie.

There’s also what happened when we saw part of the backstory of another iconic Harrison Ford character, and the terribleness that ensued.

The opening sequence of Indiana Jones and the Last Crusade is everything the backstory of a mysterious and awesome character should be. It doesn’t ruin him, in fact, it makes him more mysterious and awesome. It explains a lot about him without coming straight out and banging you over the head with it.

The young Henry Jones is a Boy Scout in Colorado/Utah in the early 20th century. Boom, we have an explanation for his MacGyver-like tendencies and ability to survive in caves and desert areas. That’s where he grew up! And a Boy Scout nonetheless!

The sequence does not make a big deal out of the two major reveals to the Jones character. They come across as almost afterthoughts to the plot, and that makes them better. Jones falls through the top of a circus car and lands in a snake pit. Boom, revealed. Then he picks up a whip for presumably the first time, cracks it, and it cuts his chin, leaving a scar. Since Harrison Ford actually does have a scar right there, this was a little joke to make River Phoenix seem more like Indiana Jones.


The hat, given to him by the evil guy’s Jones-like assistant, is the only emphasized reveal. A little aside with Professor Henry Jones showing him obsessed with the grail is a plot point developed later in the film. But we don’t know everything. We know just enough to want more. The opening sequence was the most discussed and talked-about part of the movie when it came out, and I know this because I was there reading and talking about it.

And that created the biggest problem with the Indiana Jones backstory, the ill-conceived and badly-executed (at least when it comes to storytelling and the like) “Young Indiana Jones Chronicles” TV show of the early 90’s.

You only might remember this abysmal piece of garbage (when it comes to Indiana Jones’ story only, and I mention this twice because a friend of mine worked on the then-extremely advanced computer special effects) if you saw it when it came out. They have since tried to re-imagine it as something interesting, but every time they have tried, it has failed, and thank you fellow viewer for keeping this horrible trash where it belongs.

The Last Crusade sequence presented young Henry Jones as an adventurous Boy Scout in America, who became the great Indiana Jones when he grew up.

You see the difference? Young Indiana Jones had the kid going on safari with Teddy Roosevelt and in Paris with Ernest Hemingway, falling for Mata Hari and helping the Red %&$#! Baron learn how to fly.

That is not who Indiana Jones is. Indiana Jones- at least the way I see it presented- is an American kid who studied archaeology to try and please his father and discovered that his adventure bug finally helped him instead of hurting him. And his Boy Scout training came in very, very handy.

Indiana Jones doesn’t pal around with celebrities as an adult because he finds them ridiculous, but as a kid he’s dining with Winston Churchill and painting with Pablo Picasso? Get the hell out of here.

There is a connection between the Young Indiana Jones and the Star Wars prequels- George Lucas developed them both. Yep, he wrote Jones’ entire history and that was the basis for the show. And he of course wrote and directed prequel number one.

Of course, Lucas did create both Solo and Jones and gave them their original mysteriousness and awesomeness, so we must give him plenty of credit for that.

And that gives me some hope for Solo. Because Lucas isn’t heavily involved with it. So maybe, people like me who want to preserve the history and mystery and awesomeness of Solo made sure of it.

Laugh it up, fuzzball.

Maybe he’s not as toast as I think he is. We’ll find out soon enough. 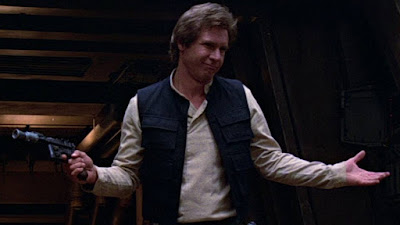