MLB Needs To Start With the All-Star Game

At this time we don't know when, or if the 2020 MLB season will start at all. There is only one professional baseball league playing in all the world right now, the China League in Taiwan.

It's a weird sports reality to consider. Normally by mid-April MLB is well underway and several of the high minor leagues have begun. There are of course the Japan and Korean leagues, there are leagues in Europe and there's the Mexican League.

Nobody else is playing.

So when MLB does come back, people are going to be itching to watch. The nationally televised "spring training" games will get the highest ratings they have in years- which means instead of the dashes ("-") that your usual A's-Reds game at Goodyear Stadium gets when it's on MLB Network, it might get a one or even a two, which is a lot (for what it's worth, the A's averaged a 0.88 rating for regular season games in 2019).

The first "official" game, therefore, is going to be highly anticipated. It may very well be the most-watched regular season MLB game of all time (if the NFL Draft ratings are any indication).

If MLB has any brains at all, to take advantage of this ratings bonanza to draw in even more viewers every game, the first game should be the All-Star game, complete with regular fan voting.

The voting would be the most logical it could be in the history of the game. The winners would be the 17 best players at each position (8 for each league plus the AL DH), and the pitchers would be all healthy and able to pitch. (How big is the total roster? Who the hell cares? Take 40 dudes if you want.) I would also make a rule saying this year all pitchers could only throw one inning at most... and we'll get to the tie-breaker in a minute.

This way, there's no chance that Mike Trout or Cody Bellinger doesn't get named a starter because some other dude is having a fluky-good first half. In fact, this will help the proper starting pitchers get named in each league (Clayton Kershaw and Justin Verlander). And it will let the proper representatives get chosen by managers without a lot of talking heads saying so-and-so should have gotten in before the other so-and-so (though that will happen regardless). Buster Posey is a legacy choice?  Well, of course he is!

In addition, once the festivities get going it will allow more people to become fans of players who aren't on the team they normally follow because more people will be actually watching and paying attention. ("Say, this Josh Bell guy can hit!") ("Say, this John Means guy might really be the only Oriole that doesn't suck!" [shoutout to Olathe])

Because everything else is ridiculous about the season already, might as well institute some new rules for the All-Star game.  They're pretty basic and things I've been wanting to see for years.

Let's say Mike Trout started the game and left in the 3rd inning. Well, once the AL has gone through everybody, Trout is eligible to return. How'd you like to see him re-enter the game as a pinch-hitter in the 9th down a run against NL closer Kirby Yates? I think you'd like that.

2) I said it earlier, "pitchers can throw a maximum of an inning," but it's worth repeating.

It would ease the roster expansion. Instead of 13 pitchers, bring 18 (that's an average of two an inning). Nobody's gonna complain about warm-up time this year.

3) The tie-breaker, and a rule so obvious it needs to be implemented immediately: Instead of extra innings, it's Home Run Derby.

3 batters per side, 9 swings each. Hit a ball over 430 feet, get an extra swing. (Vlad jr. would then bat all night). The issue here is how do you determine the batters? You could just stick with the lineup as is (and with the new substitution rule that would make things fun) OR do "managers choice." Either way, everybody on the roster has to bat before you can start repeating guys, like NHL shootouts. Or after the "15th inning" the pitchers get their turn. Regardless, this way guys who don't usually get to be in Home Run Derby get to be in Home Run Derby. Ketel Marte and Jorge Polanco get their turn! Whit Merrifield and Paul DeJong!

Frankly, it would almost be worth adding a second "not the big sluggers Home Run Derby" just to see it happen. Hell, we watched a second-tier NBA H-O-R-S-E competition, we can watch light-hitting shortstops take fancy batting practice.

Finally, where do we play it? Well, with no fans it doesn't really matter. If the "Arizona Plan" goes through, where all teams play the season in Phoenix, it would make sense to have it at Chase Field.

OR..... and go with me here... do it at State Farm Stadium, home of the Arizona Cardinals football team and the 2nd-best bowl game, the Fiesta Bowl. It's a dome, they have natural grass, you can make the dimensions as wonky as you want to (removable field-level seating will allow that), and it's going to be an exhibition game without fans anyway.

It makes too much sense to start with the All-Star game... which is why it'll never happen. Oh well, we can dream. 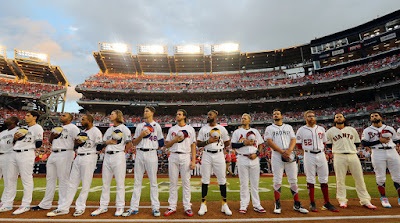