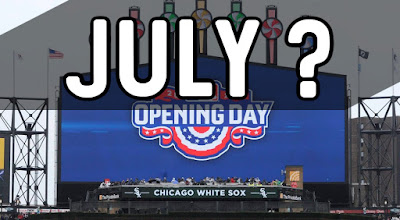 As MLB and the players continue to argue about money and completely ignore how tone-deaf that sounds in today's world, the potential length of the season continues to decrease.

A July 4th starting date would not only have been a perfect way for baseball to jump-start its way back into prominence, it would have allowed nearly half the season to be played. 81 games would have felt pretty good but bizarre at the same time, considering until this season the last time nobody played at least 90 games was 1882. Or, in contextual terms, the year before the Giants and Phillies began playing.

Of course, that would have required negotiations and legitimate compromise on both sides, and since this is professional baseball in America, that is impossible. As a result, we're looking at 70 games as the likeliest possibility, with 60 very plausible and 50 certainly not out of the question.

So I began looking around for the seemingly inevitable story: How close have the 50, 60, 70, and 80 game marks looked compared to the teams that actually made the playoffs? Somehow, that hasn't been done. So I said the hell with it and looked myself, and here we are.

I discovered that since 2012, when the second wild-card team was added and the playoffs went to their current configuration, six times has a team *not* in contention at the approximate 50 game mark ended up winning the pennant. Two of them won it all.

But there was no real reason for, say, the 2018 Dodgers to panic on May 25th because they had already won the NL West five straight years and this was only game 50 out of 162. They knew they had more than 100 games to play, and took advantage accordingly. The 2016 Indians not being in a playoff spot on May 25th is basically a fluke- on that date they were a half-game out of first in the AL Central and a half-game out of the 2nd wild-card. They took the division lead a week later and played nearly .600 ball the rest of the way. The 2012 Giants were two games over .500 and a game-and-a-half out of the second wild card on May 28th. They were in the 2nd wild-card spot by game 60 and ultimately won the division by eight games en route to the World Series title.

Obviously these are the big guys. There are plenty of examples of a team being in a playoff spot at some point and not getting to the postseason. In fact, 28 of the 30 current teams make at least one of the spots in one of the chosen years. It can get a little depressing if you're a Seattle Mariners fan- in 2018 they would have made the playoffs easily if the season stopped at any of the 50/60/70/80 game marks- they didn't fall out of a playoff spot until August, some 110 games in. Even the Reds, Pirates, and yes, the Orioles even have made the playoffs since 2012. The Mets and Tigers have both won pennants. Anyway, the only exceptions are the San Diego Padres and the Miami/Florida Marlins, and you probably could have guessed that on your own.

But how much does it change? How many of the teams in a playoff spot at game 50 play a meaningful game in October?  The answer is about half the them, and usually about half of those end up in the same spot.

Yes, the playoff picture changes dramatically every year from the 50 game mark to game 162. Teams come in and out. But most of the time, the team that's going to win the pennant is already in a playoff spot at game 50. So while not ideal, it's likely to be accurate.

Looking for a silver lining, a compressed 50 game (or so) schedule will do nothing but create more urgency on the good teams to be good. The players should respond well, because you know players do not go 100% every game during a 162-game season. They are more likely to play like it's the final month of the season and they're competing for a playoff spot because, well, if the season is two months you'd better tune up pretty quick.

The good teams are also likely to be better because I guarantee you a third of the teams are not going to try. There is a group of about eight owners who don't want to play at all because they feel it is useless to even try because their team sucks so hard. In theory, any team can get hot for 50 games or so and make a playoff spot in bizarro 2020 land. But four teams lost over 100 games last year, and there's no way you can convince me that the Orioles, who lost an MLB-worst 108 games in 2019, can put together a good 50-game stretch. Hell, they weren't over .500 after April 4th, also known as seven games into the season.

I also suspect several teams claiming money problems will effectively sell their players to the contenders. Oh sure, it may be labeled a "trade," but the transaction will consist of will be picking up the complete salary those players are owed in exchange for some lower-level minor leaguers making nearly nothing, making the difference between the haves and have-nots even bigger.

An expanded playoffs may add some of the fringe teams to create interest, but moving to eight playoff teams per league will make things very lopsided unless you do some sort of tournament for the lower teams while the top seeds get byes.

For instance, the 7th and 8th place teams in the leagues last year were Boston, Texas, Arizona and the Cubs. Texas was the only one of those who finished under .500, but I don't know of anybody who considered the Red Sox a true contender after August. A 16-team playoff will be interesting.

One other thing- I absolutely predicted a Universal DH would happen this season, as it almost happened for 2019 anyway. I do prefer the pitcher batting, but it doesn't make sense that the NL is the only professional league around that doesn't use the DH. It's also essentially an extra roster spot, so there's no way the players union is giving it up. It was coming soon. It's happening and it's not leaving.

(I'm not getting into COVID-19 or anything like that because the only thing anybody knows is that nobody knows how the disease will behave. If somebody really did know, we would have a real idea of what to do to prevent it and everybody would be behaving that way. As is, it's a haphazard mess right now.)

But I'm not going to complain about playoffs because that would mean actual baseball, even if it is after the shortest season since 1882. The game is still the game.