Everything In Sports is A Gimmick 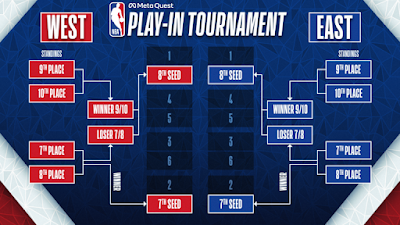 The NBA playoffs and the MLB season are both underway, which means I have heard complaints about both even before they started. This happens lots for lots of things. How many times have you complained about a vacation before you went on it? I think that's why a lot of people don't go certain places for vacation, because the first thing they think about is how long it will take to get there. Never mind that once they are actually in Australia or Italy they will have a grand time, they don't even go because of travel time and passports and the like. Both of which are things millions of people have dealt with, and yet they still went and had a grand time. Anyway, back to sports.

The biggest current complaints are that the NBA play-in tournament is "a gimmick" and MLB's apparently permanent "ghost runner" on second base in extra innings is "a gimmick." And I have heard that both things "cheapen the game" and "make it less pure" and variations on those themes. The clear implication is that the play-in tournament and the ghost runner are tricks to get people to pay more attention to sports. And I want to caution people about going too hard down the rabbit hole of "sports gimmicks."

Because if you really think about it, "major league" sports itself is a gimmick. 100 years ago, people were more interested in playing the sports themselves or watching people they actually knew play sports. Every town in America, and I am really not exaggerating, had their own baseball team made up of local players who played other town teams. In big enough places, neighborhoods had their own teams and leagues or associations to play ball. Or any place with enough teams, and baseball was the craze, so everybody had a team. Kalamazoo, Michigan, for instance, had a league in the early 1900's and the teams consisted of: the two town newspapers each had a team, a couple of local companies each had a team, cigar clerks and postal clerks each made up a team, and the Knights of Pythias had a team. If they got paid, they created leagues of players who were paid to play. (The pro Kalamazoo teams, for instance, played in the Southern Michigan State League.)

Basketball and football, which came after baseball, became more popular because of those local teams. You look at any college team's schedule from 1904 or 1924 and they're playing the local YMCA or the naval base or the high school or the lumber mill team or whatever company fielded a team in addition to the other nearby colleges, whether they were considered "major" or not.

And since most "major league" sports were on the east coast, people in the south, the west, and the southwest only sort of cared about the American League and the National League. Plenty of players who could have played in "The Majors" turned it down because they were from Seattle or Kansas City or Atlanta and the pay was really about the same. And that's just baseball. The NFL was a midwestern minor league with a big name and big dreams all through the 1920's and even into the 30's. The NHL was mostly eastern Canada and the northeastern U.S. Pro basketball was hardly considered at the time. Some NFL owners created pro basketball teams to play in hockey arenas on the nights there wasn't hockey. The NBA didn't exist until after World War Two, in the mid-1940's. (The first what we now call NBA game was played in Toronto!) Pro basketball in the 20's and 30's basically consisted of barnstorming teams like the Harlem Globetrotters and hundreds of teams similar to them... and the Globies were the most famous because they were made up of black players, thus their name. Most pro basketball barnstormers in the 20's and 30's were all-white teams.

The idea of a full-time sports player was generally impossible until salaries began to exponentially increase in the late 60's and early 70's, assuredly not coincidentally around the time free agency first began to occur. Most players had to take second jobs in the off-season. You hear about lots of baseball players going on the vaudeville circuit in the 1920's, and mostly it was to make an extra dollar. (Even Babe Ruth did the vaudeville thing and he was the highest-paid player of them all). Lots of them owned car dealerships or went into restaurants or worked insurance. Now, lots of them didn't work very hard, but they sure weren't in the gym 6 hours a day. The insurance companies used them as publicity men, and their name was the obvious selling point for the restaurant or car dealer. But they still needed a job, because sports was a half-a-year job. It was, for all intents and purposes, not a real job but "a gimmick."

Okay, now that you've been disillusioned by the idea of a "sports gimmick," let's look at the two specific things mentioned, the NBA play-in tournament and the MLB ghost runner. Well, as long as we're being truthful here: the playoffs are a gimmick and overtime is a gimmick.

The owners and leaders of leagues came up with the idea of playoffs to get more money from people. The idea of a baseball World Series happened less than a decade after the very first pro league, the National League, formed in the 1870's. By 1884 there were two baseball leagues and they agreed to have their champions play each other to see who was better. (In fact there were actually three so-called "major leagues" in 1884 but the third one was considered to be pretty inferior even then so they weren't even considered for this. But I digress.) That's how the legend of "Old Hoss Radbourn" was born, because he pitched all three "World's Series" games for the Providence Grays of the National League and won them all against the New York Metropolitans of the American Association. When the American Association collapsed in the 1890's, the NL went back to no playoffs but considered that boring and invented the "Temple Cup" between the first and second place teams. But the first place team didn't care about the playoff and lost most of the series against the second place team. That's how little people cared about the postseason.

Overtime is also another invention by owners to get more money from people, so the fact that the rules are different for overtimes in all sports makes perfect sense, because ties are problematic for playoff positioning. (See? It's all connected!) Baseball was actually the first sport to invent overtime with the idea of "extra innings," rather conveniently forgotten when people complain about the ghost runner. In their early years the NHL had a full regular season overtime period and then the game ended in a tie, but they stopped that during World War Two and didn't bring regular season overtime back until the 80's. The original rules of basketball by Dr. James Naismith have the option of a "sudden death overtime" (first basket wins, this was when it was a hard to score- dribbling hadn't been invented). College football games ended in ties for decades, even bowl games. (The reasoning, and I'm not making this up, was that amateurs couldn't handle the extra wear and tear of overtime. And this was when they played 9 or 10 games a year, not 15.) The NFL started overtime in 1940 for divisional playoff games, and for championship games in 1946 after the 1945 title game almost ended in a tie. And since NFL overtime rules have always involved some sort of "first score wins" concept, truly the biggest change ever in NFL overtime history, aside from starting it, is the new playoff rule guaranteeing both teams a possession no matter if a team scores a TD on the first possession.

So, really, overtime and playoff games are gimmicks, period. Adding more teams to the playoffs or changing overtime rules is not new. In fact, the very first sports gimmick, done solely for the purpose of making money, was adding outfield fences to prevent fans from seeing the game for free. In the beginning when baseball players hit the ball real far, they just kept running around the bases as the fielders tried to get the ball and relay it back in. (This is still true in baseball's ancestor, cricket.) But owners didn't like people watching the games for free. So they built fences and started charging admission and making money that way. (And that meant the putting in seats, which eventually became stadiums, etc. etc.) But then they had to make a new rule about batting the ball over the fence.

Thus, the home run is actually a gimmick. So yeah, don't go down the "sports gimmick" rabbit hole.