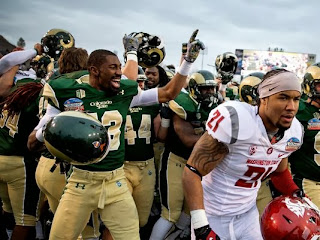 I would have been more worried had I started well with my 2013 bowl predictions. Usually I start poorly because I haven't seen many of the teams play, because, you know.... they're terrible. This year I was about two minutes from starting with a win, but that Washington State-Colorado State finish happened. So I would have been 2-2 on day one, instead I was 1-3. And that nearly became 0-4, because Louisiana-Lafayette nearly completely blew a 21-0 lead against Tulane and I was only saved by a missed field goal to tie at the end of regulation. Then Monday, East Carolina needed a two-touchdown fourth-quarter comeback to beat Ohio, so that makes me 2-3. Which I consider a rousing success.

As for the bowl games themselves.... here's what I tweeted Saturday when that first game, the New Mexico Bowl, was just underway:

See, even #ESPN thinks there are too many bowls... keeping a #kubball blowout on the Mothership while bouncing #NewMexicoBowl to #espnews
— Alex Drude (@Alex_Drude) December 21, 2013

Oh, and here's a still picture from the Blue Turf Bowl. In Boise.

This is more or less the only bowl I've ever been to as a civilian (aka, straight-up fan). I say more or less because it may take place in the same stadium as the bowl I saw, but it's not technically the same bowl. I went to the Aloha Bowl, and this isn't it. The Aloha Bowl started in 1982 and was played on Christmas Day. It got very popular, because, well, spending Christmas in Hawaii is something everybody should do at least once. So a couple of years after I went to it, they added a second bowl game and made it a doubleheader. 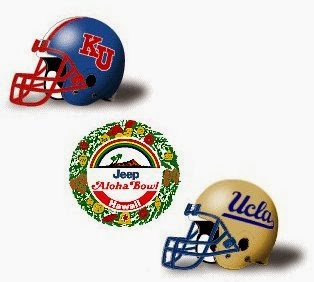 Turns out, there can be too much of a good thing. Whether it was over-extension by the bowl committee or what, both bowl games collapsed. One of the games moved to Seattle, technically, and became the Seattle Bowl, and the other dissolved. Well, after the one year when there wasn't a bowl game in Hawaii but there was one in Seattle, people realized this was very stupid. So the bowl game in Seattle dissolved and they added a new one back in Hawaii, but this time they mostly play it on Christmas Eve.

Which should make it much better for everyone involved. The year I went, as a member of the marching band, on Christmas Eve we all kind of looked at each other and wondered what to do. So we looked for a restaurant that was open and didn't cost a billion dollars. Guess what's open in Honolulu on Christmas Eve? Taco Bell. Yep, so our lavish Christmas Eve dinner was Americanized Mexican food by a palm tree. Then after that memorable feast, a bunch of us went on the beach and told stories of Christmas Eves past. What I remember most about that is not the stories, but that we were near the Honolulu airport, so as we're nearing midnight on Waikiki, planes are taking off for the mainland or wherever. And as odd as being without family in Hawaii on Christmas Eve and waiting for a bowl game to start was, being on a plane at midnight seemed odder. So there's that.

Oh yeah, this year's bowl game. Oregon State and Boise State. Two teams that play each other in the regular season often enough, but this time it's a bowl game. So really, it's an MSC qualifier of a questionable bowl game... but it's in Hawaii, so that counters all non-bowl arguments. Hawaii trumps.

Boise State, you may have heard, sent their starting QB home for conduct detrimental to the team, and he says he didn't do what they said he did.... which was take a leak off the hotel balcony. Really. Add to that that this is the first game for the Broncos in about a decade without Chris Peterson, who took the Washington job when Sark went to USC, and this is a hell of a start.

They take on an Oregon State team that began the season with an “upset” loss to FCS school Eastern Washington, (who made the semifinals of the FCS playoffs, so “upset” is not a real accurate statement) then won six in a row, and then lost five in a row to end the season (although they really should have beaten both Stanford and Oregon). Some people out there are now, once again, questioning Mike Riley's job security as head coach, and since these are people who have not followed the Oregon State athletic department like I have for the last dozen years, I have to tell these people again that the Beavers do not act like how most athletic departments act. They do not fire coaches on whims.

In fact, they barely fire coaches at all. Mike Riley is a Corvallis native who left Oregon State once. Once, for the San Diego Chargers, because he had to try the League. But he showed up the second year of the Ryan Leaf era, and that failed miserably. So when Dennis Erickson, who the Beavs hired to replace Riley, bailed on the Beavs for San Francisco (aka, the nadir of the franchise in the last 30 years), what did Oregon State do? They hired Riley back and didn't even think twice about it. Since then, he's become the most successful coach in schools history, he's the winningest coach in school history (those are two different things), and he does nothing but consistently have over-achieving teams.

And his guys constantly get drafted and have good careers in the NFL. In the NFL draft, at least two Oregon State guys go higher than anyone outside thought they would, and they end up making big impacts almost immediately. In 2012 the Chicago Bears drafted a Beaver in the third round named Brandon Hardin, who missed the entire season because he tore a stomach muscle. Usually when a guy misses a whole season he's not gonna get drafted. (Unfortunately, they released him this year because he keeps getting hurt) But the Bears also have a kick-ass defensive lineman named Steven Paea, who was a 2nd round draft pick who endedup kicking everyone's ass and forcing them to start him as a rookie. I think you can figure out where Paea went to school. The Bears like the Beavs. And Bears head coach Mark Trestman and Coach Riley look like twins anyway. How come no one else has pointed this out? 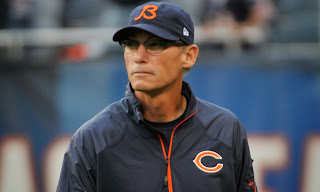 Anyway, in next year's draft, Brandin Cooks, who won the Biletnikoff as best college wide receiver in the country, will get drafted very high. Um, that's assuming he doesn't come back for his senior year. Considering virtually nobody does, I think that's a pretty safe assumption. Cooks is the second Oregon State Beaver to win the Biletnikoff in the last ten years, the first was Mike Haas in 2005. When Mike Riley was also the head coach. Can we stop with the firing talk now?

As for the game. I can't go against the Beavs, that's how these things work.

And now, our second guest game predictor. Mike Ficher knows his stuff. He is a bowl game history expert, a fellow Bay Area native and real classic rock fan- check out The Ultimate Oldies Show and has written some great stuff about the first five bowls, except he emailed it to me after I posted the first bowl preview article. So I welcome his analysis and thoughts for the rest of the bowl preview season. He's got some really good stuff, except for when it comes to predicting that Mike Riley will get fired. Sorry Fich.

Weather forecast for Honolulu on Tuesday, December 24? A high of 80, a low of 69 with no chance of rain.

Think these teams aren't excited about this game!

Who cares if this is the worst season for Boise State since 2005 (9-4) and the school lost its head coach after the season?  You're in Hawaii for Christmas Eve!

Who cares if Oregon State dropped its last five games and their head coach's position may be tenuous after the season?  You're in Hawaii for Christmas Eve!

In 11 games, the winner has scored below 36 points only once.  Maybe too much aloha impacts defense.  A graduate student can probably get some funding for a study.  Tip: Reduce Boise State's score by a few points--no blue turf, just Blue Hawaii.


(Note: Our first guest predictor, Bob of Arabia, went drinking with Mickey Mouse while in Anaheim and both guys are now in the doghouse. But Pluto has a pretty good pad, so nobody's really complaining. BOA's predictions will return.) 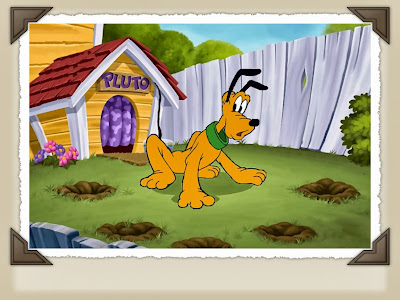